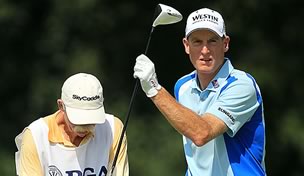 The PGA Tour announced the members of the 16-man Player Advisory Council on Wednesday, and Jim Furyk took his spot as one of the four player directors on the circuits Policy Board.

Nearly half of this years PAC, which will hold its first meeting next week at the Farmers Insurance Open, are new to the council. The PAC advises the Policy Board and commissioner Tim Finchem. New to the council are Ken Duke, Harrison Frazar, Carl Pettersson, Patrick Sheehan, Chris Stroud and Bo Van Pelt.

Furyk, who served as chairman of the 2012 PAC, replaces Zach Johnson on the Policy Board.

The PAC includes some familiar faces in Joe Ogilvie and Stewart Cink, who are both former members of the Policy Board.