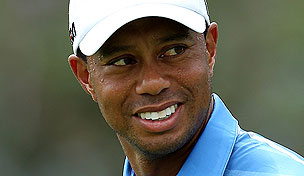 Getty Images
JAKARTA, INDONESIA - FEBRUARY 14: Chris Gane of England plays his approach shot on the 14th hole during the first round of the 2008 Enjoy Jakarta Astro Indonesian Open at the Cengkareng Golf Club on February 14, 2008 in Jakarta, Indonesia. (Photo by Stuart Franklin/Getty Images)  -

With his five-win campaign, Tiger Woods swept the accolades for a record 11th time, which is significant because the awards create an apparent system of checks and balances.

While the PGA Tour’s hardware is voted on by the membership, the PGA of America’s is handed out based on a points system.

There’s no saying that either method is better than the other, but the fact that they’ve mirrored each other for more than two decades should prove the legitimacy of each one.