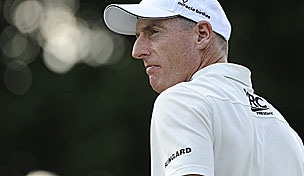 Getty Images
PONTE VEDRA BEACH, FL - MAY 07: Ryan Moore plays his approach shot on the fairway of the 16th hole during the second round of THE PLAYERS Championship held at THE PLAYERS Stadium course at TPC Sawgrass on May 7, 2010 in Ponte Vedra Beach, Florida. (Photo by Richard Heathcote/Getty Images)  -

Each night, until Davis Love III makes his Ryder Cup captain's picks, analysts on “Golf Central” will break down the players who are vying for one of the coveted spots. Love will make his decision Sept. 4, the day after the Deutsche Bank Championship.

Today’s player under the spotlight is Jim Furyk, arguably the most hotly debated candidate.

Why pick: Two of his five top-10 finishes this season have been runners-up, which only underscores how close he has come to a multiple-win season. The 42-year-old lost in a playoff at the Transitions, had a chance to win heading to the closing holes at the U.S. Open, and led for much of the WGC-Bridgestone Invitational before double-bogeying the final hole to lose. The only player to post a 5-0 record at the 2011 Presidents Cup, Furyk has made seven Ryder Cup appearances and could provide leadership and experience to a team that already boasts three rookies.

Why skip: The flipside to coming so close? The fact that Furyk hasn’t closed out the few opportunities he’s had to win this season. Of the seven players who are vying for the final four spots, only Furyk has yet to record a victory in 2012. Couple that with head-scratching meltdowns at Olympic Club and Firestone, and the Ryder Cup veteran poses real concerns in a competition fraught with nerves. (His 8-15-4 career record now works against him, too.) Though he may provide a steadying presence in the team room, perhaps it’s time to usher in a player who hasn’t developed so much scar tissue lately.