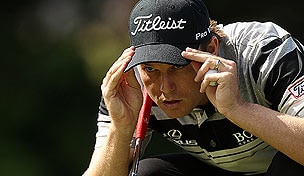 Each night, beginning Aug. 28, analysts on “Golf Central” will break down the players who are vying for one of Davis Love III’s four Ryder Cup captain’s picks. Love will make his decision Sept. 4, the day after the Deutsche Bank Championship.

Today’s player under the spotlight is Nick Watney, who last week won The Barclays for his first victory of the season.

Why pick: Love always has said that he wanted a hot player on his team, and no one in the game is hotter than Watney, who authored an impressive – and convincing – performance last week at Bethpage Black. For years, Watney has been one of the Tour’s preeminent ball-strikers, and he seemed to regain the steely putting stroke that led him to two victories in 2011. Watney would be a perfect fit for big and brawny Medinah, and his killer instinct in final rounds makes him an ideal singles player. He went 2-1-1 at the 2011 Presidents Cup in Australia, too, so you know he can handle the pressure.

Why skip: Don’t get drunk on one performance. Sure, Watney picked an ideal time to notch his first win of the season, but it doesn’t erase what had been a disappointing campaign for the 32-year-old who seemed poised to crack the top 10 in the world. Prior to The Barclays, he had mustered only three top-10s this season and plummeted down the world rankings, to 35th. Love should reward the most consistently good player – not necessarily the one who got hot two weeks before the picks were announced.