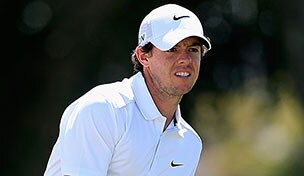 Getty Images
ORLANDO, FL - MARCH 20: Jason Day of Australia kisses his wife Ellie while holding son Dash following his one stroke victory on the 18th hole green during the final round of the Arnold Palmer Invitational presented by MasterCard at Bay Hill Club and Lodge on March 20, 2016 in Orlando, Florida. (Photo by Keyur Khamar/PGA TOUR)  -

No one broke 70. More than 100 balls found the water. Only four players are under par.

Yeah, that qualifies as a tough day at the office for the 68 players teeing it up this week at the Cadillac Championship. Some of them shared their thoughts on Twitter about the rough second round:

Really tough day at the office, even had 1 of the spectators try 2 nick my golf ball on the 10th! Luckily thr is always tmr! #82 #Only9back!

That was a grind out there today! But another chance going into a weekend so a good days work overall! #BlueMonster #CadillacChampionship

That was the longest 27 holes ever....played really solid but found it extremely tough to putt in those winds...course def had its teeth out