Players vying for national title at Golf Channel Am Tour 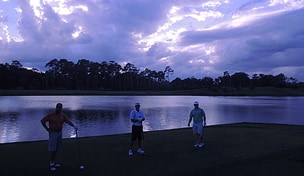 Make no mistake: For the players contending at this week's Golf Channel Am Tour Championships, the stakes are high. For many of them, it's a rare opportunity to realize a dream.

And when they find themselves in contention after a couple of rounds, especially if they've never really been in that position before, the pressure really mounts. After all, no matter what level it is, it's a national championship, and no one can take that lightly.

Such was the case for the final group in the Hogan Flight down the stretch. Robert Simpkiss of Palmer, Mass., led by four strokes going into the third round on the Stadium Course at the TPC Sawgrass. He shot a 91 that included a 50 on the front nine, but didn't shoot himself out of the tournament. He's currently four shots behind the new leader, Steven Paul, who fired an 83 (242 total) in the same group.

'I felt more nervous than I ever have in my whole life,' said Simpkiss, who runs a telecommunications wiring company. 'I couldn't breathe the first eight holes, and I played like it.'

The third member of the group, Randall Ricker had a pretty good round going, including a back nine in which he was only 2 over par when disaster struck on the par-5 16th hole. From the middle of the fairway, trying to hit an easy layup, he hit the Lord Voldemort shot of golf (A Harry Potter reference: We dare not speak its name), also known as a hosel rocket.

It went right, but unfortunately for Ricker, an air conditioning contractor from Coral Springs, Fla., it didn't go into the water. Instead he found himself with an impossible lie on the bank, from where he wound up hitting it into the water and made 9.

Asked if he felt the pressure, Ricker said, 'Absolutely. All I had to do was hit a lousy layup.'

Of course, on the next hole, the infamous island green 17th, Ricker hit his tee shot to within a few feet to make birdie.

'There were no nerves on that hole,' said Ricker, who hung in with an 88 and is tied with Simpkiss in fourth place, 'not after what happened on 16.'

So we're left with Paul, a junior criminal justice major at Bridgewater State (Mass.) College, as the survivor. He felt the pressure, too, but apparently handled it better than anyone. He made a crucial 10-footer to save par on the 16th, then hit in the front right pot bunker on 17. Taking two to get out, Paul escaped with a double bogey.

'To be honest with you, I was more nervous about the tee shot,' he said. 'When I saw it make it to the bunker, I was relieved.'

As for the rest of the tournament, Paul Erdman (Erie, Colo.) and Charles Lyon (San Diego, Calif.) boasted rounds of 68 at the Golf Channel Am Tour National Championships, recording the lowest score of the tournament after three rounds.  Lyon went from tied for 17th place to sixth on the leaderboard, while Erdman jumped four places to claim third place with one round to go.

Missoula, Mont., resident Brian Beach retained his top spot in the Championship Flight (handicap range 3.9 or lower) after at third-round score of 70 at the Ponte Vedra Inn and Club’s Lagoon Course.  He extended his lead over Jeffrey Perkins (Glen Burnie, Md.) by one shot to lead the field by three.  Erdman’s low score of 68 put him in third place.