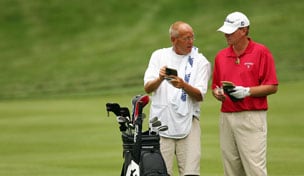 Steele suffered a heart attack on Oct. 14 at the Greater Hickory Classic where he was caddieing for Kirk Triplett. He had been placed in a hypothermic coma to help his body recuperate from the trauma.

According to Mark Huber, a fellow caddie and friend of Steele’s, doctors tried to revive Steele on Saturday and he suffered another heart attack and died.

“He was one of those guys that nobody ever had a bad word about him,” Huber said. “Some caddies like to be in the show, but he just wanted to be a caddie.”

“He was the best kind of caddie. It didn’t matter if you were a Monday qualifier at a Web.com event or a major champion you got his best game. Upbeat all the time, tremendous experience, he did all the little things. He was a pro’s pro,” said Triplett, who began working with Steele in 2010. “He loved that life.”

The highlight of Steele’s career came at the 1987 Masters when he worked for champion Larry Mize and he spent much of his career working for Tim Herron, who he won the 2006 Colonial Invitational with.