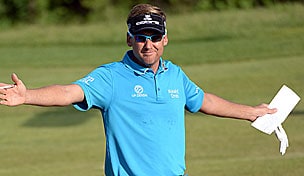 JERSEY CITY, N.J. – After some recent harsh criticism of fans who scream at golf tournaments – especially those who scream the Howard Stern-inspired “Baba Booey” – it was believed that Ian Poulter would be a target for more such treatment from outside the gallery ropes on Thursday afternoon.

It didn’t happen, though, he reported.

Poulter tweeted after the round:

The good news of today was only 1 donut shouted out Baba Booey and he was swiftly removed from the premises.

A PGA Tour official confirmed late Thursday night, 'A fan was removed for disrupting play as he yelled during Ian Poulter's backswing.'

Of course, that may have had less to do with decorum winning out and more to do with Poulter’s unfashionably late tee time after two lengthy weather delays. Backed up six hours from his original tee time, Poulter didn’t start his round until approximately 5:30 p.m. local time, with the majority of fans already having left for the day.

PGA Tour executive vice president of communications Ty Votaw recently told GolfChannel.com that a screaming fan would only be removed if he affected competition.

Following the PGA Championship two weeks ago, Poulter unleashed a flurry of tweets showing his anger toward such outbursts from fans.

“We should be allowed to take 10'000 volt tazers onto the course and tazer ever muppet who shouts out something stupid. I would laugh then.”

“This baba boo s--- & mash potato crap shouting wouldn't happen at Augusta, The Open, nor would it happen at Wimbledon. Tazer the thrushes.”

“I'm calling for @PGATOUR to step in & stop this shouting out right after shots. Message in to @PGATOUR with your thoughts. Tazer them?”

“I have no problem with this Baba Booey it's simple. @pgatour have said they will remove the few that spoil it for the real golf fans.”

“Is this the atmosphere we are asking for in golf. Golf is a game of respect and honesty Not stupid outbursts. BA Boom.”

“I find it an issue when someone shouts out on impact miss it when your putting. Or when some calls Get in the rough. Simply Disrespectful”

“If you need to be heard on TV at golf tournaments. Can I suggest. Work hard on your game you will be seen & heard at same time. #Simple”