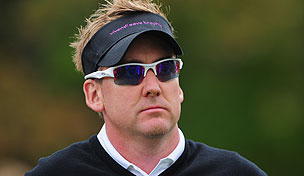 Getty Images
DUBAI, UNITED ARAB EMIRATES - FEBRUARY 06: Alvaro Quiros of Spain during the third round of the Omega Dubai Desert Classic on the Majlis Course at the Emirates Golf Club on February 6, 2010 in Dubai, United Arab Emirates. (Photo by Ross Kinnaird/Getty Images)  -

Though the top five players in the Official World Golf Ranking are not American, Ian Poulter said Wednesday to expect a Yankee surge in 2012.

“There is some great talent coming out of the States. I’m not going to say they are in a slump in any way, shape or form; they have some fantastic players,' Poulter said at the JBWere Masters.

“But I think certainly in the next 18 months, two years, we will see a push from those young guys in the States.”

Steve Stricker, 44, is the highest ranked American at No. 6. Dustin Johnson (7) and Webb Simpson (9) are two of five 20-somethings inside the top 10 this week.

Poulter, however, has his eye on Rickie Fowler to surge further than his career high of 23rd after returning from winning the Korea Open in October.

“Obviously it won’t take him long to start winning plenty of tournaments. He won in Asia, but he hasn’t won over there (in the U.S.),” Poulter said. “I’m sure it won’t be long before he makes a hard push up the world rankings.”