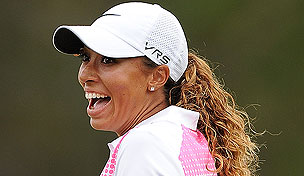 Getty Images
Rory McIlroy of Northern Ireland hits his 2nd shot on the 12th hole during the First Round of the Dubai Duty Free Irish Open Hosted by the Rory Foundation at Royal County Down Golf Club on May 28, 2015 in Newcastle, Northern Ireland. (Photo by Andrew Redington/Getty Images)  -

PHOENIX – Renee Powell is eager to see Cheyenne Woods tee it up this week at the JTBC Founders Cup.

Powell, 67, was just the second black woman to become an LPGA member, following Althea Gibson, the former tennis star who turned her interest to golf. Powell and LPGA Hall of Famer Kathy Whitworth are the tournament honorees of this year’s Founders Cup.

Only four black women have ever played the LPGA as members, with LaRee Sugg joining the tour in 1995 and Shasta Averyhardt joining in 2011. There is no black player competing as a member of the LPGA’s tour this year, but Woods is playing on a sponsor exemption this week.

Woods won the Australian Ladies Masters in February on the Ladies European Tour and grew up in Phoenix, where she still makes her home.

“Cheyenne is a fine player and a wonderful individual,” Powell said. “I’m thrilled to see her playing this week, because, you know, we don’t have anybody out here. Four [black] players aren’t very many in 64 years.

“I was thrilled to see Cheyenne win. Hopefully, there are a few other young ladies out there now who will make the tour, because it’s important from my standpoint.”