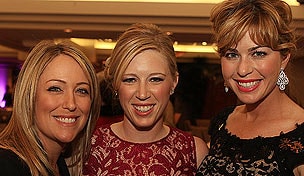 Getty Images
PONTE VEDRA BEACH, FL - MAY 06: Jim Furyk plays from a bunker during a practice round prior to the start of THE PLAYERS Championship on THE PLAYERS Stadium Course at TPC Sawgrass on May 6, 2009 in Ponte Vedra Beach, Florida. (Photo by Richard Heathcote/Getty Images)  -

BOCA RATON, Fla. - Morgan Pressel broke through the $2 million earnings mark Monday, but it wasn’t because of her on-course activities.

The five players spent Sunday evening mingling with members and donors at a gala dinner where Pressel outlined how funds have already saved lives throughout the Boca Raton community and urged those present to continue to fight against a disease which claimed the life of her mother.

Monday, the five players spent time on the golf course with pro-am participants and put on a clinic for members and guests.

Pressel also has another reason to celebrate; last month her boyfriend, Andy Bush, proposed. The pair plan to wed in January 2013.