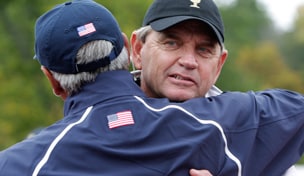 DUBLIN, Ohio – Sunday’s anticlimactic finish at the Presidents Cup was compounded in some eyes by a lack of high-profile match ups in the singles session.

Unlike at the Ryder Cup, where captains fill out a line up without knowing the other’s order, Presidents Cup captains can match each other pairing for pairing. So when Couples sent Bill Haas out in the sixth match and Price responded with Adam Scott many pundits balked.

In the ninth match, Couples went with Woods and Price answered with little-known Richard Sterne.

“I did my pairings this morning to try and win the cup, not to put (world Nos.) 1 or 2 together or 3 or 5 or whatever,” Price said. “The whole idea of the three of us, the four of us getting to do the picks this morning was to put what we felt was the best strategy forward to win this cup.”

Considering the International team was trailing 14 to 8 and the U.S. needed just four points to win the cup, Couples figured Price would load the early part of his line up with his best players to try and build momentum. Couples, however, had a different plan for his team.

“We set it up to put Tiger Woods in the slot. If it didn’t domino our way Tiger would be the guy to finish it off,” U.S. assistant captain Davis Love III said.

The strategy worked for the U.S., with Woods securing the winning point with his 1-up victory over Sterne. It marked the third consecutive time in the Presidents Cup Woods recorded the game winner.