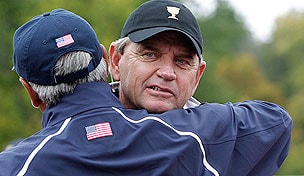 DUBLIN, Ohio – Not long after his team had concluded an 18½ to 15½ loss in the Presidents Cup, International team captain Nick Price discussed how much he’d like to serve in the role again.

And he didn’t mince words.

“I would be honored if they ever asked me to be captain of this team again,” Price said. “I don't care where it is.”

The next edition of the event will take place in South Korea two years from now.

“I tell you what, it's been so much fun, planning strategy the last 14, 15 months, getting to know all of these guys, going to some of the tournaments and meeting them and spending time with them,” Price continued. “It's been an absolute privilege.”

There is certainly precedence for Price to captain another team. Each of the last three International captains – Peter Thomson, Gary Player and Greg Norman – led multiple teams.