Punch Shot: Biggest over- and underachievers 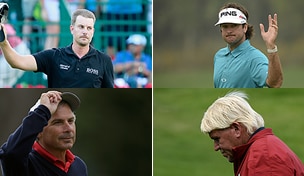 Getty Images
At the third event in the FedEx Cup Playoffs, video of Tiger Woods showed he moved his ball while removing loose impediments. When approached about it later, he maintained it merely oscillated. He was assessed a two-shot penalty.
-

Dustin Johnson, fresh off his WGC-HSBC victory, has eight career PGA Tour wins, including at least one in his first seven full seasons on Tour. But that's not enough for everyone. Some believe Johnson, with his immense talent, is underachieving. GolfChannel.com writers weigh in with who they believe are the most underachieving and overachieving players in the game.

Early in my career I asked Charles Howell III if he considered himself an underachiever. The answer was all at once an indictment of the concept and an enlightening glimpse into the mind of an elite athlete.

“Do you consider yourself an underachiever?” retorted Howell, who is normally as accommodating as they come on the PGA Tour but clearly I had struck a nerve. His point was one’s expectations are entirely homemade and the only benchmarks worth considering come from within.

With that baseline, give David Toms the nod for this generation’s top overachiever. Just twice . . . twice, in a 21-year Tour career has Toms failed to finish inside the top 125 in earnings, a statistical anomaly considering that he’s never ranked higher than 50th in driving distance. In the era of the bomber, Toms won 13 Tour titles and a major despite his distance limitations.

Conversely, Couples still ranks among the game’s longest and his smooth, effortless swing continues to be the envy of players half his age. While 15 Tour tilts and a major was enough to earn Couples a spot in the World Golf Hall of Fame, the King of Cool certainly expected more from himself.

A chronically cranky back cost Couples much of his prime, but that doesn’t change the fact he probably had greater expectations than 15 titles and a single green jacket.

At age 28, Kim certainly has the talent to compete at the highest level – his three PGA Tour titles attest to that fact, as do his spots on both the 2008 Ryder Cup and 2009 Presidents Cup squads. The last of those wins, though, came in April 2010 and feels much more distant than that. In the interim 3+ years, Kim has battled multiple injuries while essentially falling off the golf radar. After joining the short list of players with three wins before age 25 – one that includes Tiger Woods, Phil Mickelson and Adam Scott – Kim hasn’t cracked the top 10 since the 2011 British Open and hasn’t even played on the PGA Tour since withdrawing from the 2012 Wells Fargo Championship.

If you saw him warming up on the first tee at your home course, you might think you could get the better of him – then he’d probably drum you 6 and 5. Though diminutive in size and hardly a bomber off the tee, Johnson has found a way to win, and win often. His victory this year at the BMW Championship put him into rarified company of players with 10 PGA Tour wins and a major title, and the Iowan could potentially be headed toward a Hall of Fame induction years from now. His win at the 2007 Masters, one in which he laid up at each of Augusta National’s par-5 holes, shows just how effective Johnson’s game can be, even if he takes the less-traveled route to success.

Stenson is No. 3 in the Official World Golf Ranking. Given how his game has taken him to the last outpost to hell on more than one occasion, that's some mighty overachieving. Stenson started playing golf when he was 12, and later worked himself on to the Swedish national amateur team, but by his own admission, he was middle of the pack on that team, until a surge late in his amateur career. As a fledgling pro, he played the South American Tour, the Swedish Tour and the European Challenge Tour. He failed to get his European Tour card his first time through, and he battled through two dizzying spells of lost form, but look at him today. He has already won the FedEx Cup this season and is looking to win the Race to Dubai, too. No player has ever won both. Stenson has won seven European Tour events in his career and four PGA Tour titles, including a World Golf Championship event and The Players Championship. At 37, he has the game to break through and win his first major championship.

At the other end of the spectrum, there’s Daly. It’s difficult to consider a guy who won two majors an underachiever, but Daly seemed capable of leaving such a larger mark on the game. He showed his great skills winning the PGA Championship and the British Open in two completely different tests of heart and skill. His personality and his lifestyle brought challenges, distractions and obstacles. He never made a Ryder Cup team. He’s the only player from Europe or the United States to win two majors and not make a Ryder Cup team. Surely, even Daly would concede he was capable of more.

Now, I understand that such a question can be taken in a few different ways. Some will translate overachieving as the player who has accomplished the most with the least amount of tangible skills.

Well, that player certainly isn’t Watson. His raw talent may be unparalleled in the professional ranks; his ability to hit sweeping hooks and towering cuts is second to none.

But I consider the 2012 Masters champion an overachiever for a few different reasons than the obvious ones.

One is because he’s gotten to where he is without ever taking a formal lesson. That’s right – while most pros are victims of paralysis by analysis, Watson enjoys a homemade swing that probably couldn’t be taught anyway.

The other is because he had never won a professional event before reaching the PGA Tour. Not on the mini-tours; not anywhere. Check the record books: Back in 2005, he finished 21st on the Nationwide Tour money list, which then promoted its top 20 players to the big leagues. However, because No. 1-ranked Jason Gore had already claimed his card through other means, the circuit extended the offer to the 21st player.

The rest is, quite literally, history.

It pains me just to type this name, because if the question instead had been, “Who is the nicest guy on the PGA Tour?” there’s an excellent chance I would have offered the same response.

Stats are stats, though – and the stats show that while CH3 owns 14 career second-place finishes and eight third-place results, he still has just two total victories.

Granted, much of that can be chalked up to bad luck more than underachieving. After all, on 22 separate occasions he was better than some 150 of the world’s best players. So, too, can his uncanny ability to fall one or two spots shy of qualifying for the Masters or U.S. Open or WGCs seemingly every single year.

Simply watch Howell at the driving range and you’d think he was one of the game’s elite ball-strikers. And he is – he ranked 14th in both scoring average and greens in regulation during the 2013 season. He’s hardly a terrible putter, either, placing in the PGA Tour’s top-third in strokes gained-putting.

These numbers can be perceived as underachieving, but they can also be looked at another way: Howell is on the verge of – finally – producing some more victories. The second half of his career could be very much like that of Matt Kuchar, going from underachiever to overachiever in no time at all.

For one of the nicest guys on the PGA Tour, let’s hope it happens.