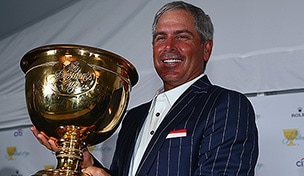 A perfect 3-0 record as Presidents Cup captain begs the question – is it time for Fred Couples to get a shot at leading the Americans in the Ryder Cup? GolfChannel.com writers debate whether Captain Cool should get the call.

That’s not to say Freddie couldn’t be the U.S. skipper. Of course he could. He might even go undefeated in that competition, too.

But it’s more an issue that Couples might not want to be Ryder Cup captain. He’s a player's manager. He keeps things loose. He lets the guys play. He doesn’t get fazed.

That laid-back vibe works at the laid-back Presidents Cup, where players showed up with wigs and shook hands Fresh Prince-style and adopted a squirrel as the unofficial mascot.

The Ryder Cup? Every week is a new commitment. Every decision is vetted. Every comment could be construed into bulletin-board material. Being a Ryder Cup captain is a full-time, two-year gig. Easygoing doesn’t work. Neither does looseness.

If Captain Cool looked anything but Sunday – when the Americans held a six-point lead heading into singles – then how would he handle the pressure and intensity of the Ryder Cup, which can make even the most seasoned player want to upchuck on the first tee?

Couples should remain a one-cup captain.

It’s just silly if taking the Presidents Cup job somehow disqualifies Couples for a chance to lead the Americans against Europe. I say a chance, because I’m not sure Couples would take it, but he deserves the chance. If he’s not offered, it’s a snub every bit as egregious as the PGA of America skipping over Larry Nelson. Couples is a Hall of Famer, a major champion and a member of five U.S. Ryder Cup teams. That’s a Ryder Cup captain’s resume.

Outside the walls of the PGA of America, who cares that Couples dated the Presidents Cup before the Ryder Cup? Actually, his Presidents Cup run creates tremendous curiosity over how Couples’ leadership style would fit at the Ryder Cup. Would his team respond the same way to him in a significantly more intense Ryder Cup setting? Would Captain Cool navigate the heightened pressures as effectively? Here’s hoping someday we learn those answers.

A lot of people believe that the United States Presidents Cup team took on the personality of its captain these last three times, but I'd argue that it was the captain's personality that was perfectly suited for the more laid-back style of this event.

While the Presidents Cup is all smiles and butt-slaps, the Ryder Cup is about pressure and emotions. That's not to say Freddie couldn't handle it – I'm sure he'd be fine – but the characteristics of his Presidents Cup teams just wouldn’t carry over to a Ryder Cup.

And quite frankly, I'm not sure how much he'd like it, either. Couples seemed nervous when his team was 'only' leading 17-13 on Sunday afternoon. How much pleasure would he derive from an event where the pressure is magnified tenfold?

Again, that's not to say he couldn't handle it. Or couldn't be successful. Or that I wouldn't want him to do it. It's just that everyone would be expecting the same looseness and energy that pervaded his Presidents Cup rosters. And that would be impossible to replicate at the Ryder Cup.

Should Fred Couples get his turn as a U.S. Ryder Cup captain? Of course. Will he? Well, that’s another column.

But following Boom Boom’s third successful turn leading the American side over the Internationals, the only thing that seems to be standing between Captian Cool and the Ryder Cup helm is politics and misplaced priorities.

Whatever the motivations, the U.S. players respond to Couples’ laissez faire leadership style, winning by an average of four points at home (Harding Park and now Muirfield Village) and away (Royal Melbourne) during his tenure.

“The only thing I pay a lot of attention to is my guys. You know, they will tell me right now when the bus is leaving, I don’t care. When is the bus going in the morning? I don't care,” said Couples late Saturday, which prompted an eye-roll by Hunter Mahan. “When we get out here, I care a lot.”

Couples’ is the ultimate player’s coach, leading through consensus. Late Sunday, for example, he huddled with his two assistant captains, Tiger Woods, Phil Mickelson and Mahan to set his Sunday singles line up. It’s a leadership style that is more Steve Jobs than Steve Spurrier, and it works with today’s high-profile, highly-paid professionals.

Maybe Tom Watson will be the game-changer the PGA of America hopes he will be next year in Scotland. But either way, Couples deserves a turn. Whether he will get it, well . . .