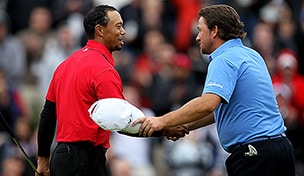 The 2013 season may have ended, but there is still plenty of golf to be played across the globe over the remainder of the calendar year. GolfChannel.com writers debate which event is the best of the rest.

With respect to this week’s WGC-HSBC Champions or next month’s Australian Masters, the only must-see golf stilling looming on the 2013 schedule is the DP World Tour Championship in Dubai.

The European Tour finale is lucrative, star-studded and infused with a healthy amount of intrigue even for American audiences.

Henrik Stenson is poised to become the first player to win both the FedEx Cup and Race to Dubai in the same season, but the Swede showed up at the first playoff event last week in China with an ailing right wrist and plenty of doubt.

If Stenson’s wrist becomes more than just an annoyance, Graeme McDowell, No. 2 on the Race to Dubai points list, Justin Rose (No. 3) and American phenom Peter Uihlein (No. 9) all could race past him in Dubai.

As an added level of intrigue, Rory McIlroy, currently No. 62 on the points list and outside of the field for the season ender in Dubai, has started to show signs of life and is poised to make a late-season run.

Remember, the Ulsterman finished third at the Singapore Open and won the DP World Tour Championship to close 2012. He could be due for a similar rally which could make the European Tour’s season-ending stop a must-see event.

During what is largely viewed as the off-season for golf (perish the thought), the best of the remaining events look to combine a strong field with a world-class venue. For my money, no tournament will merge those two factors better than next month’s World Cup of Golf.

The event boasts a limited field of 60 players, but among them some of the world’s best – recent major winners Adam Scott, Graeme McDowell and Angel Cabrera, not to mention rising stars like Jason Day, Nicolas Colsaerts and Matteo Mannasero. Nearly a third of the field can make the claim that they have participated in either a Ryder or Presidents Cup.

The true appeal of the World Cup, though, is the venue. For four days, players and viewers alike will be treated to the rolling fairways and pristine greens of Royal Melbourne, host of the 2011 Presidents Cup and arguably one of the best courses in the world. During a portion of the calendar when the golf pickings are relatively slim, I look forward to watching some of the game’s best compete on a truly fantastic layout – all for pride, country and an $8 million purse.

Give me a seat in front of the television for the Turkish Airlines Open next week.

Hey, it's world No. 1 Tiger Woods in his last tournament appearance outside his unofficial, limited-field event at Sherwood Country Club. It’s an official event for the European Tour, one of its Final Series tournaments in the Race to Dubai. Three of the top five players in the world are in the field with No. 4 Henrik Stenson and No. 5 Justin Rose also scheduled to play.

While this event won’t be stacked with all the top players in the world, Woods will get a test with Lee Westwood, Ian Poulter, Charl Schwartzel, Louis Oosthuizen and Ernie Els all in the field. This competition is meaningful and that makes watching Woods more meaningful. Will he get his sixth title of the year? That’s one of the better questions left this year.

Of all the tournaments between now and the end of the year, I’m most looking forward to the Northwestern Mutual World Challenge.

More casually known as “Tiger’s Tournament,” this one may feature a better lineup with only 18 players in the field than half of the regular season full-field PGA Tour events on the schedule.

That’s because each of the 18 players who will tee it up at Sherwood CC are currently ranked inside the world’s top-30, including, of course, its No. 1-ranked host.

And therein lies the biggest reason for so much anticipation: No matter how you slice it, Sunday’s leaderboard down the stretch will be filled with elite players for the simple reason that everyone in the field is an elite player.

You can’t say that about any other event over the next two months.