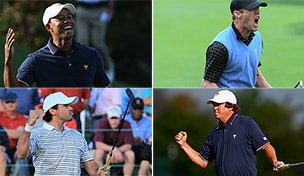 Getty Images
Stuart Gold brings an edge to Big Break Greenbrier, as seen in this photo of the golfer.  -

Another Presidents Cup is in the books and so is another U.S. victory. While Tiger Woods' stellar play lead the Americans, was there a unsung hero who was overshadowed? And the Internationals tried their best to cut into a large deficit on Sunday, led by Jason Day and Graham DeLaet. So who was the MVP for both teams? GolfChannel.com writers debate.

Considering the amount of rain that swamped Muirfield Village during the Presidents Cup, most would agree Paul Latshaw, the club’s taskmaster superintendent, was the man of the match.

Picking each team’s MVP, however, is not so clear cut.

For the winning U.S. side, Tiger Woods gets the nod. The world No. 1 was the leading points earner for the home team (four) and secured the winning point for the third consecutive Presidents Cup with his 1-up victory over Richard Sterne; while part-timer Steve Stricker (3-2-0) deserves a solid honorable mention for his play and the way he partnered with newcomer Jordan Spieth.

Despite another loss for the Internationals, there was a silver lining amid the gloom that blanketed Muirfield Village.

Jason Day and Graham DeLaet would have to share man of the match honors for captain Nick Price’s squad. Day, whose debut in Australia two years ago was less than stellar, teamed brilliantly with the Canadian and rolled over Brandt Snedeker in singles play, 6 and 4.

As for DeLaet, in the quest to find some sort of parity in the biennial blowout, the newcomer had all the markings of a game-changer. Infused with energy and effortless ballstriking, he ignited the crowd early Sunday when he chipped in for birdie at the 18th hole to halve his foursome match against Phil Mickelson and Keegan Bradley. Hours later he capped his first Presidents Cup with another chip-in birdie at the last for a 1-up singles victory over Spieth.

It wasn’t a vintage Tiger Woods performance this past week for the U.S. – quite frankly, he played better at both Harding Park and Royal Melbourne – but as we’ve seen plenty of times in the past, even something less than his best is often still good enough.

The lone competitor to earn four points at Muirfield Village, he deserves the honor in a not-so-close race over Jason Dufner, Bill Haas and Matt Kuchar.

For the losing squad, it was Graham Delaet. In their news conference after the loss, the International team sounded as if it had gathered to pay homage to its lone Canadian member. Nick Price sang the praises of DeLaet. So did Jason Day and Ernie Els. And why not? He’s a likeable guy who becomes even more likeable when he’s winning points for your team.

It wasn’t just that he won, though. DeLaet displayed a flair for the dramatic that we haven’t seen at a team competition in years. On Sunday morning, he earned a halve with Day by chipping in on the final hole of their foursomes match against Phil Mickelson and Keegan Bradley. Later that afternoon, he holed a bunker shot to defeat Jordan Spieth in singles.

There aren’t many players who hit their best shots when the pressure was at its peak, but DeLaet was able to do that. Els, Day and Brendon De Jonge all played well, but these honors go to the Canadian.

This would’ve been an easy week for Tiger Woods to put his game on cruise control, but he grinded hard winning more points than any other player in this Presidents Cup.

It was just two weeks ago that Woods confessed to playing under “tired” legs at the Tour Championship. It has been a long season, tough on his body with back, neck and elbow issues. Still, Woods, 37, played all five matches this past week through aggravating stop-and-start conditions with three rain delays. Most impressively, he played in three different matches on Saturday, the suspended finish to foursomes, a fourball match and a suspended start to the next foursomes session. Woods helped deliver two points and accounted for seven birdies and an eagle over 31 holes on that very long day.

In the end, with his back finally giving out on the back nine in Sunday singles, Woods still delivered the clinching point for the Americans. As much grief as he has received in these international events over the year, big-time credit is due for the commitment this past week.

Graham DeLaet's introduction to the Presidents Cup was distinguished by his closing skills. He didn't finish like a rookie in these team matches and that makes him the man of the match for the Internationals.

The Canadian chipped in at the 18th Sunday morning to gain a half point for his team in the conclusion of a suspended foursomes match and holed out from a greenside bunker there in the afternoon's singles to secure a 1-up win over American upstart Jordan Spieth. DeLaet's 3-1-1 mark equaled Jason Day for most points won on the International side.