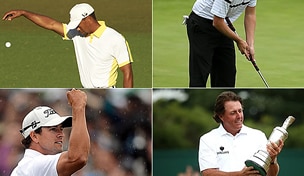 Before the new season begins – in two weeks – we’re looking back at the year that was on the PGA Tour. Our writers debate: What was the story of the 2013 PGA Tour season?

For those scoring at home, it has now been 18 majors played since Tiger Woods last hoisted a Grand Slam keepsake. That’s 18 misses in his quest to reach Jack Nicklaus’ benchmark haul of 18 majors.

To put that in context, the world No. 1 won six majors in his first 18 Grand Slam starts as a professional. Blatantly unrealistic expectations considering that historic start? Without a doubt. But Woods’ drought, now five years and counting, still registers as the year’s top story.

In Woods’ defense, 2013 can hardly be considered a lost year. He won five times, including two World Golf Championships and The Players, easily collected his eighth Vardon Trophy for low scoring average and is the likely winner of the Player of the Year award when voting is completed on Thursday.

In this, Woods seemed to take the long view.

Without question, 2013 was a successful campaign for Woods. But that doesn’t change the narrative – Woods’ record in the majors, successful or otherwise, is still the year’s top story.

For the first half of the year, Scott's inspired Masters victory in the rain served as the no-doubt-about-it top story, but he was eclipsed – ever so slightly – by the mercurial left-hander winning the Open Championship, a development that he had long deemed improbable.

For two decades, Mickelson and links golf were star-crossed lovers, their torrid affairs brief and quickly interrupted by lengthy bouts of frustration. That changed at Muirfield, when he put together a come-from-behind victory for the ages on Sunday afternoon.

It should speak to the number of great stories this year that Mickelson's long-elusive title isn't a unanimous choice. It is, though, still the best of a very good bunch.

That was the story of the year in golf.

The USGA and the Royal & Ancient teamed to generate anchoring news through most of the year, first with all the angst over their proposed ban on anchored putting and then with their official ban of such strokes in May.

From a contentious players' meeting with the USGA at Torrey Pines near year’s start, to Keegan Bradley’s plight hearing taunts of “cheater” as he used his belly putter in the spring, to R&A chief Peter Dawson’s confrontation with PGA of America president Ted Bishop and through threats of legal challenges to the ban, there was no shortage of compelling developments over the anchor ban. It dominated golf’s news cycle through most of the year. With the ban not taking effect until 2016, expect anchoring to continue to make news over the next three years.

It’s easy to forget now, of course, after Jordan Spieth posted a Tour-best nine top-10s, amassed nearly $4 million in earnings, won the John Deere Classic, finished second three times and earned a spot on the Presidents Cup team. It’s easy to forget that last fall, he bombed out of Q-School’s second stage. That in January, he relied on a sponsor’s exemption to make his first Tour start. That the next two months, he was playing Web.com Tour events in Panama and Colombia.

That’s a far cry from the Tour Championship and the FedEx Cup and the $10 million bonus. Yet there was Spieth, just 15 months removed from helping lead Texas to the 2012 NCAA title, vying for the victory at East Lake and forcing Tour mathematicians to calculate the various scenarios in which he could walk away with the biggest financial prize in golf.

In the last two decades only Tiger Woods – two wins in eight starts in ’96 – has made a bigger splash on Tour as a rookie, and we’ve since seen how his career panned out. Sure, Spieth could suffer a sophomore slump, but he’s more likely to build on his sensational rookie campaign, make a bid for a multiple-win season, challenge for WGC and major titles.

At age 20, Spieth is not just tabbed as the next American star – he already is one.

The biggest story of the 2013 PGA Tour season focused on the middle of a fairway in northern Georgia. While he didn’t ultimately win the event, the cloud that surrounded Tiger Woods and “Dropgate” during the second round of the Masters created more discussion and garnered more headlines than any other singular moment this year.

The issue, discussed and dissected at length over the subsequent days and weeks, centered not only on Woods’ illegal drop on the 15th hole during his second round, but also the consequent decision by the tournament rules committee to assess him with a two-shot penalty. Amid calls for his disqualification, the world No. 1 played the next two rounds under a microscope that was sizeable even by his lofty standards.

While Woods won five times this year – and four other players hoisted major trophies – the single biggest storyline from this past season was one that caught the attention of sports fans and media well beyond the game of golf: The Drop, The Penalty and The Fallout witnessed at Augusta National.