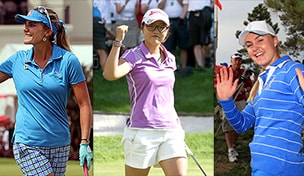 Getty Images
Morgan Pressel of the US plays her tee shot to the 13th during the second round of the Womens British Open golf tournament at the Royal Liverpool Golf Club in Hoylake, northern England, on September 15, 2012. AFP PHOTO/ANDREW YATES (Photo credit should read ANDREW YATES/AFP/GettyImages)  -

Women's professional golf keeps skewing younger and younger. Three of the game's most promising stars are teenagers: Lydia Ko, 16; Lexi Thompson, 18; and Charley Hull, 17. New Zealander Ko and American Thompson both have two LPGA wins and one on the Ladies European Tour. England's Hull helped the European Solheim Cup team defeat its U.S. counterpart earlier this year. Which one has the brightest future? GolfChannel.com writers debate.

Although in the short term the outcome depends on the good graces of LPGA commissioner Michael Whan, in the long run the depth of talent already demonstrated by Lydia Ko makes the teenager the best prospect in the game regardless of age.

That Whan is still mulling whether to grant Ko an age waiver to become a LPGA member next season is a bigger mystery than who will have a better career, Ko, Lexi Thompson or Charley Hull?

For good measure, Ko went back to back at the Canadian event this season, lapping the field by five strokes.

After finishing runner-up at the Evian Championship in September, Ko announced she will turn pro this year but the fact is, whether Whan has any interest in admitting it with a waiver, the teen is already among the top five players in the world according to the Rolex Rankings.

At 16 she has already eclipsed Hull and Thompson. There’s no reason to think that won’t be the case when she’s 60.

Give me one of the longest players on the LPGA, the one who averages 270 yards per pop and has the potential to reduce many venues to a wedge contest.

Lydia Ko is the real deal. She knows how to score and, it appears, how to win. Charley Hull is dynamic but remains largely unproven. But Lexi Thompson now has three career wins – in Alabama, Malaysia and Dubai – and enough upside to stake her claim as a future world No. 1. Her power and athleticism make her the most exciting prospect in the women’s game … so long as her putter cooperates, as it did last week, when she won by four.

Thompson hasn’t finished better than 112th on tour in putting each of the past two years, and she’s currently ranked 110th this season. If a coach can mold her into an above-average putter, she could become an LPGA world-beater.

Between Lydio Ko, Lexi Thompson and Charley Hull, you can’t go wrong. Picking one for the future is like picking between three burgeoning blue-chip stocks: Sure there’s some risk involved, but it’s easily outweighed by the potential reward.

With that in mind, give me Ko for one reason alone – she can flat-out putt.

Everyone on the LPGA can hit the ball in varying degrees of brilliance, but the ability to get the ball into the hole with the flatstick is what separates the elite from the rest of the pack.

Consider this: At No. 2 on the driving distance list with just over 270 yards per drive this season, Thompson averaged 25 more yards off the tee than Inbee Park. The difference, of course, is that Park has been deadly on the greens, which will lead to her winning the Player of the Year award.

Ko has the ability to be a Park-like putter throughout her career. That alone should separate her – ever so slightly – from the other teenage phenoms making headlines right now.

While Charley Hull rightfully garnered attention during this year’s Solheim Cup, she remains somewhat of an unknown entity for prognostication purposes. For me, this question is between the two teens with multiple titles to their credit, and I’m going with the one who hasn’t even turned pro yet: Lydia Ko.

While both have shown flashes of greatness, Ko has done more often in fewer overall opportunities, and has shown greater overall consistency. For the past two years, the Kiwi has earned low amateur honors upon teeing it up in any major, but has also gone on to contend time and again with professionals twice her age. This is not to mention her multiple wins as an amateur, including the remarkable feat of successfully defending her CN Canadian Women’s Open title across two different courses.

While Thompson’s length off the tee will always remain a strong asset, her putter has a tendency to desert her on occasion, which is a troubling trend. Hers will likely be a successful career, but may not reach the heights of Ko, who appears to have the more well-rounded game.  So given the choice, I’ll take Ko, a player who already seems well on her way to the No. 1 spot in the Rolex Rankings – an achievement that, given her current spot at No. 5, she may accomplish sooner rather than later.