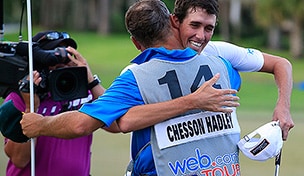 Getty Images
President Reagan didn't play much after entering office. His most notable round came at Augusta National when it was interrupted by a gunman who took hostages in the pro shop and demanded to speak to him. (AP photos)  -

The inaugural Web.com Finals have come and gone with 50 players earning their PGA Tour cards for the 2013-14 season on Sunday. And while the new qualifying system is here to stay, there is some debate over whether it is better than the old Q-School. GolfChannel.com writers debate which system they prefer.

There were moments on Sunday afternoon at TPC Sawgrass when the Web.com Tour Championship delivered the kind of excitement we’ve come to expect when players face the ultimate opponent – unemployment. But those moments were few and far between, at least compared to the annual drama Q-School produced.

Andres Gonzales’ plight – a missed 18 footer for par at the last hole that cost him his 2013-14 PGA Tour card – was heartbreak in HD; while Brad Fritsch and Andrew Loupe’s final-round charges were the stuff of legend. But it wasn’t Q-School.

One golf scribe summed up the central difference between the old qualifying process and the new – this season’s four-event Web.com Tour Finals – is that at the Fall Classic you play for score, at the Finals you play for money.

Confusion, more so than a climactic finish, ruled the day on Sunday at TPC Sawgrass, with calculators replacing clinched fists as family and friends tried to track the progress of big league hopefuls. Brendon Todd shot the round of the day (a 5-under 65), but he was already exempt for next season via his finish in the top 25 on the regular-season Web.com Tour money list.

And what drama there was on Sunday at the finale was largely absent for the first three Finals events as a byproduct of the new system’s volatility. Consider that Loupe missed the cut in the first three qualifying events yet earned his card with a tie for sixth at the Tour Championship.

The new system is here to stay, but that doesn’t mean it’s better.

The Web.com Tour Finals represent a marked improvement, assuming, of course, that the necessary tweaks are made before next fall.

At its core, the Finals better identifies the players that will graduate to the PGA Tour because it is a four-week series, not a six-day marathon. In the old format, with so many good players, with everyone so desperate to secure playing privileges, one poor round could be the difference between competing on the PGA and Web.com tours. Now, players can afford an off-week – or three – and still receive their card.

The tweaks to the current system are obvious: The money breakdown is so drastic that it required players to post only one good finish to lock up their Tour card, and the priority ranking should be skewed more toward the 25 players who earned their card through the season-long money list.

Even so, just like the FedEx Cup, this new series will only get better with age.

After the first implementation of the Web.com Finals, this much is evident to me: It’s a much improved alternative to Q-School.

Don’t get me wrong. I’m neither heartless nor unromantic. I do love the idea that a guy can go from working in a pro shop, then pay his thousands of dollars to play Q-School and be teeing it up alongside the Tigers and Phils of the world a few months later. And really, I wish there were still a few PGA Tour cards – five sounds about right – still handed out at the annual grindfest.

But if the PGA Tour is looking to promote the best players to its most elite circuit, then the Web.com Finals will accomplish that goal. Rather than six rounds in a single location, players are tested during 16 rounds in four different locations. A greater sample size should equal a greater return in talent, too.

This isn’t unique to golf, either. Think about it: If you were running a business and hiring candidates, would you want to promote those who proved their worth over the longer haul or those who showed one brief flash of brilliance? Give me longevity every time.

In golf, many are often reluctant to change, viewing anything new as similarly unsatisfactory. That’s not the case here, though. While the Web.com Finals could use some tweaks, it’s clear that it beats the previous system.

Give me the Web.com Tour Finals with a few tweaks.

And give me Q-School, too.

Hey, if you can have your cake, why not eat it, too?

And then bring back PGA Tour Q-School but cut the cards awarded to 10.

That’s 50 PGA Tour cards won via three different routes. Doing it this way, the Web.com Tour’s regular season would be more justly rewarded, you would still have the new appeal of the Web.com Tour Finals – and you would keep the romantic notion of Q-School where players (including collegians) can come out of nowhere and win a Tour card.