Punch Shot: Where should PGA go outside the U.S.? 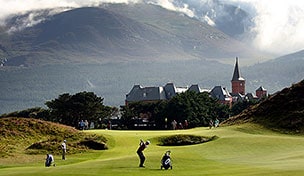 Getty Images
Tiger Woods of the U.S. Team hits a pitch shot on the 17th hole during the Day Four Singles Matches at the Muirfield Village Golf Club on October 6, 2013 in Dublin, Ohio. (Photo by Andy Lyons/Getty Images)  -

The PGA of America is looking into taking the year's final major overseas. If it does happen, where should they take the PGA Championship first? Golfchannel.com writers debate the best spots around the globe.

If the PGA of America decides to take its major championship overseas, it couldn’t make a more spectacular splash than to try to play it at Royal County Down in Northern Ireland.

The idea of seeing some of the grandest courses in the world become homes to majors for the first time excites. There are so many deserving venues that would add to the PGA Championship’s buzz. Royal Melbourne in Australia would rank near the top of the list. So would Royal Dornoch in Scotland or maybe Hirono Golf Club in Japan. All places that have never been home to a major.

Royal County Down, though, would be the place to start. Originally designed by Old Tom Morris in 1889, the golf course is built along Dundrum Bay with the Mourne Mountains as a backdrop. It has been home to the Walker Cup and Curtis Cup and numerous other national championships, and the PGA could make it home to a major. The stage would become one of the stars that week.

Can I be cynical for a minute here? In light of the PGA of America – yes, that’s PGA of America; not PGA of The World – revealing that it will examine bringing the crown jewel of its tournament schedule overseas, my first thought is that such a move would be done for less than innocent intentions.

Sure, one of the main goals of the organization is growing the game. And nothing can grow it more than bringing it to those who are craving it.

And yet, I can’t get past the notion that contesting the PGA Championship internationally will have all the feel-good undertones of FIFA announcing that the World Cup would go to the highest bidder – weather and conditions and other logistics be damned.

If PGA officials want to prove this untrue, then if and when they bring the fourth major to a foreign land, they should choose it based solely on location and which country is most craving a major. Herein lies the tricky part: There is no definitive measure of such a thing. There is no poll or ranking system which will tell us that Japan is hungrier to host a major than Australia, or that Italy wants it more than South Africa.

As such, it will be difficult to know – if and when the time comes – whether the PGA will be going elsewhere for all the right reasons.

Let’s hope so. Growing the game is a great message, one worthy of the PGA’s relentless passion. But maybe the organization needs to take a cue in this matter from the slogan of another industry that attempts to increase knowledge for its cause: Think Globally, Act Locally.

Once you get by the xenophobic speed bump of the PGA of America taking its championship outside the United States, the most likely “away” game would be China.

For the first time, the PGA Tour will hold an event in Asia that receives full FedEx Cup points this week (the CIMB Classic in Malaysia) and next week the WGC-HSBC Champions will mark the first fully official event in China. If you doubt the game’s potential impact take a moment over the next fortnight to tune in and watch the galleries.

Fans have been flocking to what have largely been second-tier events for years in Asia. The curiosity of golf has caught on in China, a nation of 1.35 billion with a growing amount of disposal income and free time.

As participation numbers in the United States, and most developed golf nations, continues to stagnate, the economics of scale make China the most likely frontier to grow the game globally.

Imagine the impact of a 156-player PGA field assembled at the sprawling Mission Hills complex in Shenzhen playing for the year’s final major. Consider the influence Tiger Woods or Rory McIlroy or Phil Mickelson would have if they lifted the Wanamaker Trophy with the better part of 1.35 billion watching.

You may not like the idea of a travelling PGA, but you can’t deny the impact it would have on an emerging golf market like China.