Punch Shot: Who will be men of the match? 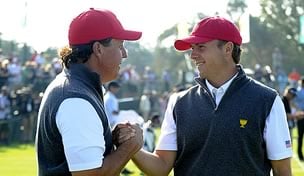 DUBLIN, Ohio – The 10th Presidents Cup begins Thursday at Muirfield Village, where a team of 12 American will take on 12 International players. GolfChannel.com writers weigh in with who they believe will be the man of the matches on both sides.

With all this experience and leadership on the roster, can a 20-year-old rookie really outgain every other teammate this week? If you’re even asking that question, you clearly haven’t been watching him this season.

Throw in the fact that he’ll be competing alongside wily veteran – and putting maven -- Steve Stricker for at least a few sessions, and it should be a huge week for Spieth.

By his own admission, Els hasn’t enjoyed a great stretch of golf recently. Since winning the BMW International Open in June, he hasn’t finished in the top 10 in 10 consecutive events.

That doesn’t mean he’s been terrible, by any means. Els placed T-17 at the Dunhill Links Championship last week and has showed signs of turning things around. Competing here at Muirfield Village, where he won the Memorial Tournament nine years ago, should help rekindle some fond memories.

But there’s more to my pick than history. With seven rookies on the roster, the International team’s hopes may rest on the mighty shoulders of its most experienced player. The other 11 team members each look up to Els – heck, three of ‘em came up through the ranks playing golf at his academy in South Africa – and he’ll feel some pressure to deliver.

And I just happen to like Els’ chances when the pressure becomes greater.

Although the outcome seems foretold, the players who will emerge from this week’s Presidents Cup fray as the men of the match seem less certain.

Conventional wisdom would suggest it would be a Tiger Woods or Adam Scott, undisputed team front men, who would collect this week’s MVP hardware, but historically those type of clutch performances come from unexpected places.

For the United States, Steve Stricker is the likely candidate. The part-timer earned his spot this week at Muirfield Village playing on a limited schedule, has been as consistent as anyone over the last few months and appears to have the perfect partner in newcomer Jordan Spieth.

Stricker is also keen to score some personal redemption following a dismal performance at last year’s Ryder Cup when he failed to earn a point.

As for the International side, Graham DeLaet has the look of a surprise hero. Although he’s playing his first Presidents Cup, the Canadian had a torrid playoff run to earn his first trip to East Lake last month and ranks as the Tour’s best ball-striker which will be key on a course most consider the ultimate ball-striker’s golf course.

Give me Jason Day for the Internationals, Matt Kuchar for the Americans.

These two guys squared off in a semifinal match at the Accenture Match Play Championship earlier this year, with Kuchar taking down Day.

They both relish these man-to-man games. Kuchar was the U.S. Amateur champ in ’97. He won the Accenture Match Play Championship this year and finished third in it two years ago. He is 15-3 overall in the event. He’s 4-5-3 overall in Ryder Cup and President Cup matches, but poised to turn that into a winning record, too.

Day likes mixing it up in match play. He likes the little mind games that go with it. He finished third in the Accenture Match Play Championship this year and is 9-4 overall in the event. His 1-3-1 Presidents Cup record is due for a boost.