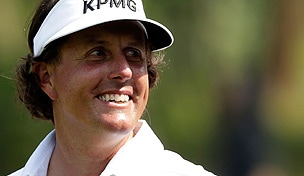 Getty Images
VILAMOURA, PORTUGAL - OCTOBER 16: Local wildlife gets close to the action during the first round of the Portugal Masters at the Oceanico Victoria Golf Course on October 16, 2008 in Vilamoura, Portugal. (Photo by Warren Little/Getty Images)  -

Tiger Woods has cut down his schedule for years and Steve Stricker was competitive as ever while 'semi-retired' last season. Now, in light of Phil Mickelson's recent decision to follow suit in an effort to put more focus on the majors, GolfChannel.com writers debate whether the less-is-more attitude will catch on with other players.

If Phil Mickelson is going to play less to focus on the majors, and Tiger Woods decides to play less to avoid those “tired legs” he felt at the Tour Championship, that’s just more prize money left over for everyone else, more opportunities for victories and ranking points.

So if I’m another elite player, I’m tempted to send a thank-you card to Mickelson and Woods.

If Lefty and Tiger both trim their schedules, will other players follow suit? I don’t think so. The game’s best players know their own strengths and weaknesses. They know when they’re playing too much or too little, and they’re basing it on how their own minds and bodies react, not on what they know about Mickelson or Woods. Rory McIlroy acknowledges he played too little at year’s start. That isn’t based on his comparing his schedule to Mickelson or Woods. It’s Rory knowing Rory.

Now, if Mickelson wins two or three majors with a reduced schedule next year, yeah, it probably will make the game’s other top players look to see if there’s something to this less-is-more thinking. Winning tactics do influence players.

After all, this is not a new concept. Jack Nicklaus was among the first to cut back his schedule, opting to spend more time at home and put more emphasis on the majors, and that’s largely been the driving force behind Tiger Woods’ schedule making for years.

In recent years Adam Scott has followed suit, trimming his schedule to put a premium on only the biggest events, and he’s practically been a factor in each since. Ditto for Steve Stricker, whose first year of “semi-retirement” was arguably one of his best as a pro: eight top 10s in 13 starts.

That scaled-back approach worked for these players, yes, but it might not for others, including Mickelson. Since 1993, he has played 20-plus events in all but three seasons. Lefty said he won’t “put as much importance” on the tournaments that are played well before a major, though he did not say which tournaments he would cut. His is a particularly interesting case, because he has long said he prefers to play the week before a major, meaning Houston, Firestone and maybe even Memphis are all still in the mix.

Point is, a playing schedule is a matter of personal preference. These players know their games, and how best to maximize their performance. Whether the less-is-more approach will work for Phil – like it has for many other top-tier talents – remains to be seen.

Without a doubt, we’re going to see more guys in their 40s go the Steve Stricker route in coming years.

As much as the romantic notion of traveling week-in, week-out to compete for millions of dollars sounds enticing to those of us who are mere mortals with a club in our hands, do this for a quarter-century and even the coolest job in the world will feel old after a while. Throw in the fact that most golfers of this age have families at home and whopping bank accounts, and the motivation to grind away like Vijay Singh naturally wanes with time.

Perhaps players would be more reticent to give it a try if Stricker had fallen flat on his face in semi-retirement, but the argument can be made that more time spent away from the game actually helped him inside the ropes. And really, it’s nothing Tiger Woods hasn’t been doing for years, too. Sometimes less is more. Even though a player would have 10 more chances to win by competing in 30 tournaments rather than 20, it doesn’t necessarily mean that he’ll win more often.

If you’re a player like Ernie Els or Lee Westwood or Jim Furyk or so many others, there’s more motivation at this point in your well-established career to be home resting up and preparing for the big tournaments than to put more miles on the private jet. Phil Mickelson will be the next one to go this route in 2014. Don’t be surprised when others continue the copycat process in the near future.

While Phil Mickelson appears ready to embrace a truncated schedule in 2014 – one from which Steve Stricker yielded unexpected levels of success this year – I don’t anticipate many of the world’s best going down a similar road.

A conservative baseline estimate would be 10 starts for an upper-echelon player: four majors, three of four FedEx Cup Playoff events, two of four WGC events and The Players Championship. Most will play in at least 11 of those tournaments, if not 12 or even all 13. From there, players are likely to add a handful of top-tier events, not to mention tournament starts tied to sponsor relationships. While not every top-ranked player will choose the schedule of Brandt Snedeker or Matt Kuchar, who both made 23 starts on the PGA Tour last season, most will find a way to make at least 16-17 starts per year, as Adam Scott and Justin Rose did in 2013.

Additionally, players like Stricker and Mickelson are in unique positions: the former clearly placing an emphasis on his life off the course, while the latter now has a singular focus around which to shape each year’s schedule: the U.S. Open. Both now have a certain degree of financial flexibility, having made more than $35 million in on-course earnings during their respective careers, and neither appears particularly concerned with his position in the world rankings. That’s their prerogative, but it’s hardly going to become the norm. For the vast majority of players, even the best in the world, a relatively full-time slate of at least 16-20 starts will still remain the most effective way to keep their golf games sharp – and keep up in the rankings at the same time.

Welcome to the era of less is more.

Phil Mickelson said this week he plans to tailor his schedule to peak at the majors. When pressed for exactly what that means, Lefty figured he’d trim about 25 percent from his historical lineup.

Over the last 10 years he’s played an average of 20.7 events, which means he would play five fewer events. End of the world, right?

Consider that’s more than one more event that Tiger Woods has averaged over his last eight seasons (13.75). Consider that’s two more events than prolific part-timer Steve Stricker played in 2013. Quality over quantity has worked out pretty well for those two.

When Mickelson says, “My whole purpose and focus will be ... participating in certain tournaments that will help me play well in those majors.” He means that another missed cut at The Greenbrier Classic – he is 0-for-3 making it to the weekend on the Old White Course – or another pedestrian effort at Bay Hill, where he hasn’t posted a top-10 finish since 2002, does little to prepare him to complete the final leg of the career Grand Slam (U.S. Open) and add to his major legacy.

From fewer starts comes greater focus; it’s a truth that Woods has spent more than a decade proving and a strategy that is likely to become a trend among the top players.