Punch Shot: Will Tiger or Rory have the better 2014? 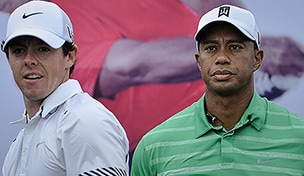 Rory McIlroy defeated Tiger Woods Monday in a one-on-one exhibition match in China. Both have a few more starts in 2013, but the focus is already on the upcoming year. Who will have the better 2014? GolfChannel.com writers weigh in.

The only way Rory has a better 2014 than Woods is if the latter goes on the disabled list, which, of course, is not outside the realm of possibilities.

The reason Tiger will have a better year has little to do with talent.

Woods, who turns 38 in December, is more settled in his life. His swing is no longer a work in progress. He’s not tinkering with equipment. His desire to win remains strong. He has a steady girlfriend and what seems like a satisfying relationship with his children. His health (at least for the time being) is good, though we may forever hold our breath when he settles into an awkward stance and gives it a full rip.

McIlroy remains a man in transition, both on the course and off, and his ongoing legal battle will hover over his head until next October.

It takes years to get used to life under the microscope. By now, Woods has seemingly mastered it.

Considering the duo’s divergent paths in 2013 history would favor Tiger Woods to have a better 2014 than Rory McIlroy, but before we mail next year’s PGA Tour Player of the Year Award to the current world No. 1 it may be worth reviewing the Ulsterman’s body of work.

For both of these players, the ultimate litmus test for single-season success is how they fare in major championships. That yardstick favored Woods in ’13, with two top-10 finishes and an untimely bounce at the Masters compared to McIlroy’s single top 10 (T-8 at the PGA Championship).

Yet recent history still favors the Northern Irishman on this front. McIlroy has two major victories – by a combined 16 strokes no less – since Woods last hoisted Grand Slam gold at the 2008 U.S. Open.

Woods’ game is as sharp as it has been in years. You don’t win five PGA Tour titles in a single season without having ownership of one’s swing, but major No. 15 has proven to be his most difficult.

In Woods it is easy to imagine a player pressing at the game’s biggest gatherings in his historic quest to match Jack Nicklaus’ major haul; while McIlroy finally seems to be at ease with his new clubs and life.

Woods may win more titles in 2014, but at this level success is measured in majors and McIlroy currently has the edge in that category.

While both held the No. 1 ranking for part of 2013, it’s a no-brainer for me when predicting who will have a stronger 2014: Tiger Woods.

Fresh off a five-win season and Player of the Year honors, Woods will have plenty of momentum when he tees it up for the first time in January. He’ll also have an increased sense of urgency when it comes to chasing Jack Nicklaus’ record of 18 majors, as Woods will turn 38 in two months and will face an appetizing slate of major venues in 2014. While I expect him to win one of golf’s four biggest events next year, even a major-less season will likely include at least two or three PGA Tour titles.

On the other hand, it’s hard to find a more polarizing set of results than “Rory 2012 vs. Rory 2013,” and if I’m asked to foretell I would say that McIlroy’s game next year will trend more toward the latter. The Ulsterman is currently plagued by a variety of distractions, including several that extend off the course, and it remains to be seen when he will resume the dominant form that we last saw more than a year ago. While he possesses the talent to win and win often against the game’s best, the variables currently in play – from equipment to relationships to litigation – make the timing of his resurgence hard to pinpoint. McIlroy will be a force again in golf, but within the confines of 2014, it’s difficult to see him having a better year than the current world No. 1.

So lemme get this straight: We’re choosing between Tiger Woods, who won five times this season and once again built a Super Wal-Mart between himself and the next closest contender on the Official World Golf Ranking … and Rory McIlroy, who failed to win a single tournament and may follow up POY awards on both the PGA and European tours by failing to qualify for each of their season-ending tournaments?

With all due respect to both my astute editors and baseball bad boy Bryce Harper, that’s a clown question, bro.

Call it a classic case of not overthinking the situation, but I’ll take the guy who won a bunch of ‘em this year over the one who didn’t.

Nothing against Rory. I’m actually bullish on his 2014 prognosis, at least in a “buy low” sort of way. If nothing else, I think that one year from now he’ll be ranked higher than the sixth position on the ranking that he owns now, for whatever that’s worth.

But Tiger is, well … Tiger. He’s the best player in the world. And while I’ll be the first to point out that at various times he appeared to either be trying too hard or not hard enough, the results speak for themselves. If any other player wins five times, we’re celebrating his career year. Tiger does it and we’re asking whether a guy who didn’t win at all will somehow pass him next year.

Maybe this is like one of those trick questions on the SAT where the answer is the one you least suspect. But I’m not going to overthink it. Give me the guy with the recent hardware sitting on his mantle.