A. Putnam poised to join older brother on PGA Tour 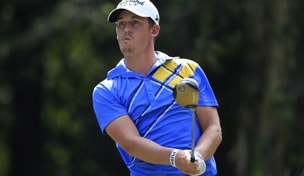 Getty Images
1991: John Daly of the USA celebrates after holing his putt on the 18th green during the US PGA Championships at the Crooked Stick Golf Club in Carmel, Indiana, USA. Daly won the event with a score of 276. \ Mandatory Credit: Stephen Munday/Allsport  -

PONTE VEDRA BEACH, Fla. – The Putnam brothers are poised to hit the PGA Tour next season.

The big question is whether there will be two or three Putnam brothers in tow when the season opens in two weeks at the Frys.com Open at CordeValle Golf Club in San Martin, Calif.

Michael, 30, locked up his PGA Tour card as the Web.com Tour’s leading money winner in the regular season. His brother, Joel, 32, is his caddie. His baby brother, Andrew, 24, is a Web.com Tour rookie on the cusp of earning a promotion to the PGA Tour after posting a 3-under-par 67 on Friday to move on to the leaderboard at the Web.com Tour Championship.

“It’s definitely some motivation to get out there since Michael’s going to be out there,” Andrew said.

Andrew, who like Michael is a Pepperdine alum, finished 53rd this year on the Web.com Tour regular-season money list. He said his goals changed as he watched his brother excel.

“It’s my first year out here, and if I didn’t have a brother who’s No. 1 on the money list and making it to the PGA Tour, I’d probably be decently content just keeping my [Web.com Tour] card, keeping my job,” Andrew said. “Since he’s doing so well, I’d say I would be more disappointed now if I don’t make it to the PGA Tour.”

Andrew is 70th on the Web.com Tour Finals money list. He probably needs a top-10 finish this week to secure his PGA Tour card though a top-15 finish might do it. Andrew was sitting among the top five after his morning round.

“I beat him the few times out this year,” Andrew said. “So I’m taking credit for his success.”