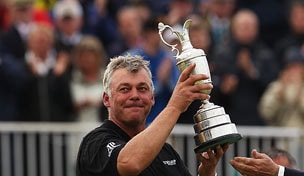 Getty Images
DUBAI, UNITED ARAB EMIRATES - FEBRUARY 05: Tom Watson of the USA plays his third shot at the 3rd hole during the second round of the 2010 Omega Dubai Desert Classic on the Majilis Course at the Emirates Golf Club on February 5, 2010 in Dubai, United Arab Emirates. (Photo by David Cannon/Getty Images)  -

With the Irish Open going to Royal Portrush in late June for the first time since 1947, the Ulster golfing community hopes to demonstrate to the R&A the potential to host its first and only Open Championship since 1951.

The country's trio of recent major champions – Rory McIlroy, Graeme McDowell and Darren Clarke – have shone the spotlight on Portrush.

R&A chief Peter Dawson paid a visit to the course recently, but asserted to 'The Scotsman' that work would need to be done.

“I enjoyed my visit. It’s a great golf course. But it hasn’t had the treatment that other Open courses have had and some of that would be required,” Dawson said. “One or two holes need some changes. And there are layout issues. It’s not obvious where the practice ground would go, for example. Or where the tented village could be sited.”

“Plus, spectator movement would be difficult,” he added. “There is a lot of bracken and stuff off the fairways. Even if that were removed, the terrain is so severe it is hard to imagine armies of spectators out there. The course is almost too good to have spectators on it.”

Dawson was pleased with the infrastructure surrounding the course, though it lacked the volume of accommodations that would be required to host the influx of thousands to the area. Political tensions would also have to be assessed to assure the safety of the players.

Despite his misgivings about bringing the Open to Portrush, Dawson says the course will receive a thorough, honest vetting.

“I don’t want to give anyone the impression that we are going there. But we do have more people going over to have a look relatively soon. And we will be very interested to see how the course copes commercially and in terms of spectator movement when the Irish Open is held there later this year,” he said. “So we are taking it seriously.”