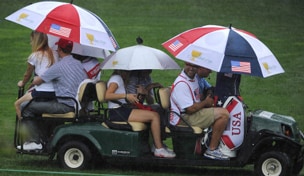 Getty Images
NEWPORT, WALES - OCTOBER 04: (L-R) Graeme McDowell and Rory McIlroy celebrate on the balcony of the clubhouse following Europe's victory in the 2010 Ryder Cup at the Celtic Manor Resort on October 4, 2010 in Newport, Wales. (Photo by Ross Kinnaird/Getty Images)  -

DUBLIN, Ohio – The rain-suspended Day 2 of the Presidents Cup is scheduled to conclude Saturday morning at Muirfield Village.

Four of the six foursome matches were incomplete when darkness halted play Friday evening, with the U.S. leading 4½ to 3½. Heavy rain caused a 2-hour and 36-minute suspension of play, preventing the conclusion of the session.

The suspended foursome matches are scheduled to resume at 7:35 a.m. Saturday. Once they’re complete, there will be about an hour break before Day 3’s fourball matches begin at 8:33 a.m. The start of afternoon foursomes will follow the completion of fourballs.

The captains’ pairings were supposed to be announced Friday night, but because of the delay they decided to wait until after the completion of play Saturday morning.

In the first of the two matches completed on Friday, Phil Mickelson and Keegan Bradley defeated Jason Day and Graham DeLaet, 4 and 3. In the other, Ernie Els and Brendon De Jonge defeated Bill Haas and Hunter Mahan, 4 and 3.