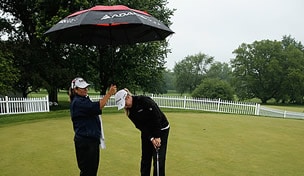 PITTSFORD, N.Y. – The Wegmans LPGA Championship’s first round was scrubbed Thursday due to heavy rain.

The LPGA announced shortly before noon that the first round will be moved to Friday with the second round moved to Saturday and with 36 holes scheduled for Sunday.

Not a single shot was struck on Thursday.

It’s the second time in the last three events that the LPGA has dealt with significant weather challenges. Two weeks ago, before the start of the inaugural Pure Silk-Bahamas LPGA Classic, a foot of rain fell in a seven-hour stretch. Flooding on the course prompted the LPGA to get creative. Ilhee Lee won an event shortened to three 12-hole rounds.

On Thursday at the Wegmans LPGA Championship, rain began falling in the early morning hours. The course was soaked with rain still falling when players arrived.

Lightning was a factor early in the morning with more than an inch of rain falling through to the noon hour.

'We had numerous greens under water, fairways puddling,' said Sue Witters, the LPGA's vice president of rules and competition.

More rain is forecast for Friday. Witters said the hope is that 72 holes can be completed by Sunday, but a Monday finish is possible.

'I'd like to believe that today was our worst day,' Witters said. 'The system we're in now is 140 miles deep. It's going to take a good seven hours to get out of here, and then we should get a good break in the middle of the night ... And the morning, the last I was told, is supposed to be scattered and spotty.  And then we have a big window, and then late afternoon, depending on the sun activity, there could be a chance of an isolated thunderstorm, but that's only 20 or 30 percent. Saturday is better, and Sunday is no rain at all.'

Two hours after her scheduled 7:59 a.m. tee time, Stacy Lewis ventured out into the rain to hit some balls on the range during the weather delay.

Lewis could tell what was coming when she left the range.

“May be the only shots I hit today!” Lewis tweeted.

With heavy rain coming down in the early morning hours, the LPGA put the event’s start in a weather suspension before the first tee times were scheduled to begin at 7:15 a.m. The rain never relented. Play was scrubbed shortly before noon.

“I think coming into the day everybody knew what the weather was going to be,” Lewis said. “We knew it was going to be a long day, long week. It always is here. So, I mean, we're golfers. We deal with rain delays all the time. You just have to stay patient with it, and when you have an opportunity to play, just be ready to go, and hopefully your golf swing can stay in a rhythm.”

Lewis played cards with Brittany Lincicome during the weather delay.

Paige McKenzie used a computer in the locker room to book flights and hotels for future LPGA events this year.

Lexi Thompson and Jennifer Johnson made plans to get their nails done and go to the movies.

Brittany Lang might have lined up the most creative use of time after play was scrubbed. She made plans to go shopping for wedding dresses. Actually, Paula Creamer made the plans for her. Creamer, Brittany Lincicome, Katie Futcher and Angela Stanford are all bridesmaids for Lang’s wedding, planned for January. Lang got engaged in unusual fashion. Her fiancé, Kevin Spann, came out on to the 18th green on Saturday of the North Texas Shootout after Lang putted out. He knelt and presented her an engagement ring.

“I thought it was romantic,” Lang said.

All the rain promises to toughen the test for players who aren’t dialed in with their swings. Accuracy is a premium with narrow fairways and gnarly rough.

“This amount of rain, with that rough, it will be extremely difficult,” Lang said. “It’s so hard to hit out of wet rough like that. It’s almost impossible. That rough is going to be horrendous after this much rain.” 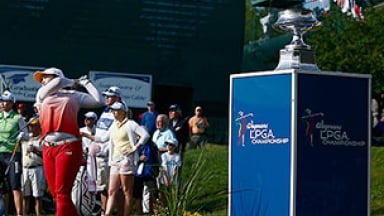 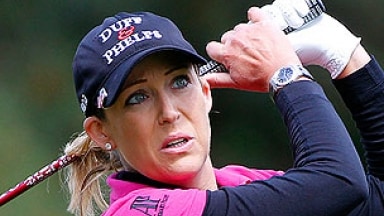