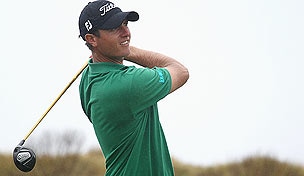 Getty Images
SAN ANTONIO TX - MAY 17: David Feherty during the fourth and final round of the Valero Texas Open held at La Cantera Golf Club on May 17, 2009 in San Antonio, Texas. (Photo by Marc Feldman/Getty Images)  -

Colsaerts, who needed to finish first or second at the European Tour’s Johnnie Walker Championship to knock Martin Kaymer out of the top 10 on the World Points list, finished in a tie for 19th at Gleneagles. That kept him at No. 12 in the standings, behind Ian Poulter.

Kaymer, the former No. 1 player in the world, hadn’t recorded a top 10 since April and was skidding down the points list, but managed to hang on to the 10th and final automatic spot when Colsaerts couldn’t finish in the top 2 at Gleneagles.

“I am obviously very happy to be on the team,” Kaymer said in a statement. “A little relieved, yes, but overall it is just a great feeling.”

Olazabal seemingly avoided a potential headache when Padraig Harrington, who was 19th on the World Points list, dropped out of contention at The Barclays. Though that event does not award Ryder Cup points, there was a growing sentiment that the Irishman should receive the other captain’s pick (Poulter seems a lock for the first one).

Other players vying for a captain’s pick: No. 13 David Lynn, No. 14 Rafael Cabrera-Bello, No. 15 Gonzalo Fernandez-Castano and No. 16 Thomas Bjorn (also one of four vice captains).

The announcement will be made at 7 a.m. ET Monday.