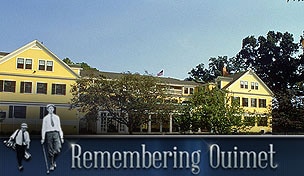 The Country Club didn't need Francis Ouimet to put it on the golf map. It was already there.

Because of the Ouimet connection from 1913, the winners of the 1963 and 1988 U.S. Opens felt an extra thrill besides "just" becoming the national champion.

Curtis Strange, who beat Nick Faldo in a 1988 playoff for the Open title, said that at the time he "was just so focused on doing the best I could do in the U.S. Open.

"That's a pretty tough task in itself."

Later when he had a chance to reflect, he thought about the Ouimet story, and about how he now was part of the extended storyline.

"I'm as proud of that as I am of winning the Open," he said.

Julius Boros won his second U.S. Open at The Country Club in 1963, beating Jacky Cupit and Arnold Palmer in a playoff. Boros, who died in 1994 at age 74, was presented the trophy by Ouimet himself.

Boros' wife, Armen, was busy taking care of the couple's young children at the time and was not able to attend the tournament. But she does recall her husband talking about it. "Julius was such a quiet, quiet person," she said, "but he admired (Ouimet) tremendously. He said he was easy to talk to."

The Country Club member and historian Louis J. Newell recalls that Ouimet was very "unsettled" by all the fuss made over him at the 1963 Open.

"I think he was very happy to have that tournament over," Newell said. "He got all that attention and he didn't like it."

Besides the 1913 U.S. Open, the most famous – perhaps "infamous" is a better description – tournament played at The Country Club was the 1999 Ryder Cup.

Shortly before the tournament began, a statue of Ouimet and his 10-year-old caddie, Eddie Lowery, was dedicated at the site.

If you're fortunate enough to visit The Country Club today, you won't find the statue. It was given to the municipal club next door, Robert T. Lynch Municipal Golf Course, where it currently stands between the parking lot and the clubhouse.

"It's a conversation piece," said head professional Tom Ellis. "A lot of people will get their picture taken with the statue, which is pretty neat. It gives people a better understanding of Francis Ouimet and where he's from."

Newell, 77, who has been a member of The Country Club for more than 50 years and occasionally played with Ouimet, who was a friend of his father's, confirmed that the idea was to expose the statue to a larger number of people than a private club could.

"We've got a lot of stuff of Francis' – his portait and a number of other things, golf balls, you name it," Newell said. "He played public-links golf until he achived notoriety, and we felt it was a good thing to do for the town, too."

It wasn't until 1953 that Ouimet was made an honorary member for life of The Country Club – the first male to be so honored, Newell said (tennis great Hazel Wightman was the first female). But Ouimet never expressed any dissatisfaction with The Country Club. Quite the contrary.

As a principal speaker at The Country Club's 50th anniversary dinner on April 21, 1932, Ouimet said: “To me, the property around here is hallowed. The grass grows greener, the trees bloom better, there is even warmth in the rocks you see around here. And I don’t know, gentlemen, but somehow or another the sun seems to shine brighter on The Country Club than on any other place I have seen.”