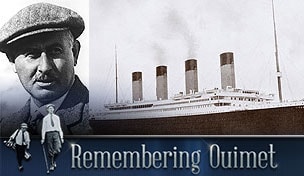 Was Harry Vardon connected to the most famous maritime disaster of the 20th century? Might he have perished in the 1912 sinking of the Titanic, changing the course of history for Francis Ouimet and golf?

There is evidence that Vardon contemplated sailing on the ship, which struck an iceberg on its maiden voyage and sank on April 15, with a loss of more than 1,500 lives, but little to back up the notion that he was booked and missed the boat only because of an 11th-hour illness.

We know this: Vardon won the 1911 British Open. Given that he was 41, had suffered a long bout of tuberculosis and hadn't won the Open Championship in eight years, his popularity soared in a similar manner to that of Jack Nicklaus when he won the 1986 Masters at age 46.

Lord Northcliffe, owner of the Times of London and the Daily Mail and a friend of Vardon's, sought to cash in by sending Vardon on a tour of the United States, with an eye toward winning the 1912 U.S. Open. After 16 years of domination by Scots and Englishmen, John J. McDermott became the first American-born winner of his country's national championship in 1911. Northcliffe wanted the trophy back in Britain, and he felt that Vardon, who had won in his only previous U.S. Open appearance, in 1900, was just the man to reclaim it.

The Vardon/Titanic story makes an appearance in two books – Mark Frost's "The Greatest Game Ever Played" and Audrey Howell's "Harry Vardon: The Revealing Story of a Champion Golfer." Howell is married to Peter Howell, Vardon's son.

Neither author got the Titanic story directly from Vardon, who died in 1937. Each one words it slightly differently, leaving room for different interpretations.

Frost wrote that Northcliffe "booked first-class passage" for Vardon on the Titanic, that Vardon became ill just two weeks before his scheduled departure, and that Vardon, after the sinking, "confessed to Lord Northcliffe that it was the first and only time he could say his illness had saved his life."

Howell wrote that Vardon became ill and scrapped the trip "(w)hen it was time to make all the arrangements," suggesting that he never actually booked passage.

GolfChannel.com, in an email, asked Frost what his source was for the anecdote. He wrote back that he could not recall a specific source, that he did the research 15 years ago (his book was published in 2002), but that he remembered feeling comfortable enough to print it.

Some golf historians think the story is overblown at best, and point to a lack of references to it at the time.

"We did an exhaustive search," said golf author/ historian Martin Davis. "I had one of my researchers go through it and we checked a whole bunch of sources including Herb Wind's book "The Story of American Golf" where there's a chapter on Vardon." No reference to Vardon and the Titanic was found.

Steve Guyot of North Attleboro, Mass., who created the website 1913usopen.com while doing extensive research on the tournament and its participants, said his doubt is rooted in the fact that "Lord Northcliffe was not exactly the shy, quiet type. He owned The Times and The Daily Mail and was very much a golf enthusiast, and yet I can't recall seeing anything in my reading of The American Golfer back issues, and I am unable to imagine him not letting The American Golfer in on his plans."

British golf author and historian Dale Concannon scoured back issues of The American Golfer and Golf Illustrated magazine, "of which I have copies for the years 1910–1914." He also found no mention of a Vardon/Titanic connection.

There's another angle that makes this story even more curious: It was reported in 1915, in The New York Times and other newspapers, that Vardon, Ted Ray, George Duncan and C.H. Mayo were booked on the Lusitania to depart on May 17 for the U.S. and that year's Open at Baltusrol. But the Lusitania never made it to Europe on its voyage from the U.S. On May 7 it was torpedoed and sunk by a German submarine off the coast of Ireland, with the loss of almost 1,200 lives. If the Vardon/Lusitania story is true, it's a mystery why reports at the time did not mention his earlier having missed sailing on another doomed ocean liner.

Regardless of the veracity of any Vardon/Titanic stories, without him canceling his plans in 1912, the 1913 U.S. Open likely would have been played under vastly different circumstances, and its 100th anniversary might have a completely different meaning, if any at all.

If Vardon had played in the 1912 U.S. Open, it's all but inconceivable Ouimet would have been in the field. First, it was played in Buffalo, N.Y., negating Ouimet's appeal as a "local" entrant. Second, in 1912 Ouimet had yet to even make a cut in the U.S. Amateur, and had not yet won his first Massachusetts Amateur. He had expressed no interest in playing in U.S. Opens, instead saying that winning the U.S. Amateur was his goal. And even if Vardon had won the U.S. Open in 1912, he was no sure bet to return to defend a title in 1913. He was still suffering from the effects of tuberculosis, and trips to America were a rarity for him.

Also, if Vardon were not entered in the 1913 U.S. Open, there would have been no reason for the USGA to delay its date from June to September. Ouimet would have had a Massachusetts Amateur title to his credit, but he didn't successfully qualify for the U.S. Amateur until September of that year. So local boy or no local boy, he very well might not have been invited to play.

U.S. golf history would be all the poorer for it.