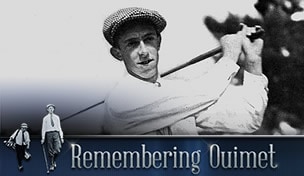 • Ouimet's wife was the sister of John Sullivan, a former schoolboy rival he had once defeated in the first round of the Boston Interscholastic Championship.

• In a 1963 article in Golf Journal written by Joe Dey, then the executive director of the USGA, Scotsman Charles D. Thom said about the 1913 U.S. Open: 'I remember an amusing incident. You should have seen the expression on the faces of the players when, on the first tee, they were given a small bottle of Scotch whiskey before starting off in the pouring rain.'

• The original purpose of Harry Vardon's 1900 tour of the U.S. was to promote his gutta-percha golf ball, the Vardon Flyer. But it turned out to be a commercial failure because of the development of the wound-rubber Haskell ball, which far surpassed it in performance.

• Ouimet was also interested in baseball and (unsuccessfully) applied to become a batboy for the Boston Red Sox. • A version of the famous painting of Ouimet wearing the red jacket symbolic of his being named the first American captain of the R&A in 1951 was done by future U.S. president and golf enthusiast Dwight D. Eisenhower. The Eisenhower painting now hangs in the R&A clubhouse at St Andrews.

• Bernard Darwin, the British golf writer who was sent to America in 1913 to chronicle the expected victory of Vardon or Ray, was a grandson of the famous naturalist Charles Darwin. He also was an accomplished golfer himself.

• Eddie Lowery became a top amateur player in his own right, winning the 1919 and 1920 Massachusetts Junior Championships (the former played at The Country Club) and the 1927 Massachusetts Amateur.

• Winning the 1913 U.S. Open was NOT Ouimet's greatest thrill in golf. In a 1963 interview with Joe Looney of the Boston Herald, he said, 'My greatest thrill, however, came when I won the United States Amateur Championship in 1914 at Ekwanok, Manchester, Vt. Winning the Open was one thing. The winning of the Amateur was the fulfillment of an ambition. The Open was a windfall. The Amateur was within reach, or so I thought.'

• Criticism of overly demonstrative golf galleries (think 'You da man,' 'Mashed potatoes,' et al) is nothing new. British golf writer Henry Leach had this to say about American galleries at the 1913 U.S. Open: '... I do wish these American golfing congregations would restrain themselves more in the matter of their applause, which becomes very wearisome and trying in its frequency. ... I wish that officials and people with flags would do something to discourage this constant clapping of hands and cheering at strokes which are often nothing much out of the ordinary, for after all a golf course is not a circus ...'