Remembering Ouimet: Why Vardon and Ray? 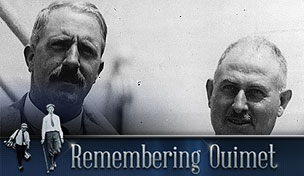 Harry Vardon was one-third of the Great Triumvirate of British professional golfers around the turn of the 20th century, but only the most ardent golf fans in the United States would likely be able to name the other two members, James Braid and J.H. Taylor.

"When we talk about the greatest players ever, of course we talk about Jones, Nelson, Nicklaus and now you put Tiger in there," said Golf Channel historian Martin Davis. "We tend to forget Vardon."

The British were eager to recapture the U.S. Open trophy in 1913 after John J. McDermott had become the first American to win the title, in 1911, and successfully defended it in 1912. Those victories, coupled with the fact that Walter J. Travis, an Australian-born naturalized U.S. citizen, had in 1904 become the first American player to win the British Amateur, still peeved the British.

Writing in The American Golfer in January 1913, English golf writer Henry Leach looked down his nose at American golfers and golf courses. "I am sure that we are appreciably better than their best, and I believe we shall always be so because the Americans have to play the game under inferior conditions and such as hardly permit of their developing the finer shades of skill," Leach wrote. "The Americans play a rather plainer game than we do. The country may and probably will produce an occasional golfing phenomenon, and it may win our Championship again, but it will never be really superior to us at golf."

Why put most of their hopes in Vardon and Ted Ray and to a lesser extent, Wilfrid Reid? Were they really the best men for the job?

In 1913 Vardon had won one U.S. Open, in 1900, and five British Opens. But before his most recent British Open win, in 1911, he had not won one for eight years. He was also 43 years old and had spent quite some time way from the game while suffering from tuberculosis. The disease still made his hands twitch, and his putting suffered considerably.

Taylor, an Englishman, was a year younger than Vardon and had won five British Opens, his fifth, and last, coming in 1913. He had played in only one U.S. Open, finishing second to Vardon in 1900.

Braid, a Scot, was three months older than Vardon. In 1913 he had won one more British Open than Vardon, five to four, Braid's most recent having come in 1910.

So why Vardon for the U.S. tour and not either of the others? Taylor did play in the 1913 U.S. Open, finishing T-30, but he made the trip to America at his own expense. Braid never played in a U.S. Open.

"I'm not sure that Vardon was considered the 'premier' player in 1913," said British golf author/historian Dale Concannon. "I think both Braid and Taylor would have been considered over him – perhaps even Ray as the 1912 Open champion) – but Vardon was by far the best known to the wider golfing public."

Americans had become familiar with Vardon during his 1900 tour of the U.S., during which he had won his first and only U.S. Open, and during the time when he was recovering from tuberculosis and playing less than usual, Vardon increased his public profile by writing books, making appearances, etc.

"The problem with Braid," Concannon said, "was that he suffered from terrible travel sickness, which is why he never played abroad. Taylor was the most in-form player at the time – shown by his 1913 Open win, but was considered abrasive and 'uncommercial,' unlike Vardon.

"That's why Wilfrid Reid went on the trip. He was a well-mannered English golfer."

As for Ray, he was seven years younger than Vardon, also from the Isle of Jersey, and a popular player because of both his personality and his bomb-and-gouge style. He had won the Open Championship in 1912, but he had contended in several others, finishing in the top 10 seven times before 1913. He would go on to win the U. S. Open in 1920, becoming, at age 43, the oldest U.S. Open champion until Raymond Floyd, older by only a few months, won in 1986.

Ray also was a different character than the one portrayed in the Disney movie, says Concannon, calling his portrayal "a disgrace. He was a soft-spoken and intelligent golfer who Vardon trusted through his entire life."

In the end, Vardon and Ray were the best men for the job – they simply didn't get it done. They came up a single shot shy of winning back the trophy for Britain in regulation, and were decisively beaten in the playoff.