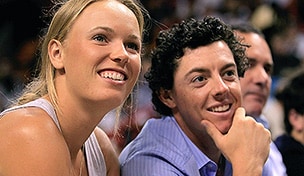 Getty Images
PACIFIC PALISADES, CA - FEBRUARY 05: Steve Stricker holds an umbrella as he waits to hit his second shot on the 12th hole during the second round of the Northern Trust Open at Riveria Country Club on February 5, 2010 in Pacific Palisades, California. (Photo by Stephen Dunn/Getty Images)  -

It appears the relationship between former world No. 1 Rory McIlroy and tennis star Caroline Wozniacki is a thing of the past.

According to a report from the Irish Independent, McIlroy recently broke things off with the 23-year-old Dane.

'Yes they are over,' explained an unnamed source in the original report. 'It's a difficult time for them both but it is for the best in the long run.'

According to the report, matters between the pair came to a head after Wozniacki posted this unflattering photograph of a sleeping McIlroy to her Twitter account, which boasts more than 550,000 followers.

'I can tell you the pair are no longer an item,' explained another unnamed source. 'Rory has a lot of respect for Caroline and their time together was good, but he feels it's time to move on now.'

This is not the first time that reports have surfaced about a 'Wozzilroy' split. In August, McIlroy denied that he and Wozniacki had broken up, questioning via Twitter the reliability of sources tied to reports at the time. The Ulsterman has been relatively inactive on the social media site in recent weeks and is now in Asia, set to tee it up this week in the OneAsia Korean Open.

When asked about the rumored breakup by the Independent, McIlroy's public relations team did not deny the report, instead explaining that 'The Communications Clinic does not comment on Rory's private life.'