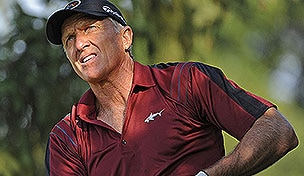 Two-time International Presidents Cup captain Greg Norman told FoxSports.com that he has essentially been “cut off” from the squad and was never given a reason why he was replaced for this year’s competition.

In fact, Norman relayed a story from after the 2011 Presidents Cup in Australia, when U.S. captain Fred Couples approached Norman after the match and said, “I’ll do it again if you do it again.” Norman replied, “OK, I’m in.”

Except it didn’t pan out that way, and Nick Price got the nod for this week’s event at Muirfield Village, where the International team will attempt to win for just the second time in 10 tries.

“So yeah, it came as a big surprise to me to get a phone call at late stages out of the blue from (PGA Tour commissioner) Tim (Finchem),” Norman said, according to the report. “Let’s just say it’s disappointing. Extremely disappointing.”

The Norman-led International teams lost by at least four points in both 2011 and ’09, but the Shark said he never received a “real reason” why he was not brought back for this year’s match.

In this report, it was suggested that Norman may have been caught in the middle of a war between rival watchmakers, Omega and Rolex. A few years ago Norman left Rolex for Omega and “became enemy No. 1,” according to the report. Rolex, meanwhile, is the official timekeeper for both the PGA Tour and the Presidents Cup.

“If that’s right,” Norman told FoxSports.com, “then all I can say is that it’s really pathetic.”

Whatever the reason, Norman says he was invited to Muirfield Village but won’t attend because of business meetings and, perhaps, something a bit more personal.

“My role is done with the Presidents Cup,” he said, according to the report. “That’s been made clear.”