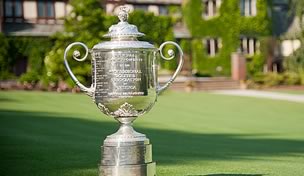 Getty Images
D. J. Trahan drives off the 10th tee during the third round of the Cialis Western Open July 2, 2005 in Lemont, Illinois.Photo by Al Messerschmidt/WireImage.com  -

The notion of an international venue hosting the season's fourth major in the near future may be closer to becoming a reality.

According to a Golf World report, the PGA of America is conducting an internal study to determine if it would be viable to take the PGA Championship overseas sometime in the next decade.

'This is an exercise we are going through, an analysis. It is far from a fait accompli that we are going to take the PGA Championship international,' said PGA of America CEO Pete Bevacqua according to the report. 'When we sat down to map our strategic plan to service our members and grow the game, the question arose as to what impact it would have to take the PGA Championship to an international location once or twice a decade.'

Host sites for the PGA Championship have been confirmed through 2019, when the season's fourth major will head to Bethpage Black as announced last month. Interim venues are concentrated along the East Coast and Midwest: Valhalla Golf Club (2014), Whistling Straits (2015), Baltusrol (2016, when the event will move to late July due to the 2016 Olympics), Quail Hollow Club (2017) and Bellerive Country Club (2018).

According to the report, Bevacqua acknowledges that 'many pieces would have to fall in place' for the season's fourth major to be held abroad and reiterated that the 20 spots in the 156-man field currently held for PGA club professionals would remain unchanged regardless of location.

'We need to push ourselves to think outside the box,' Bevacqua noted, adding that no timetable exists for a decision. 'What I have said internally is, 'Shame on us if we don't consider it and go through the exercise.''