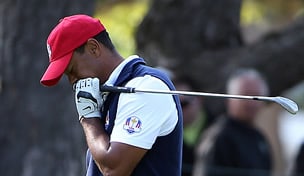 In the aftermath of the Americans’ stunning collapse at Medinah, Tiger Woods spoke privately to the team’s rookies – Keegan Bradley, Brandt Snedeker, Webb Simpson and Jason Dufner – and apologized for not earning enough points, according to Golf Channel contributor Tim Rosaforte.

Appearing on “Morning Drive,” Rosaforte revealed, “Brandt shared with me (at his fundraiser in Memphis) that Tiger got all the rookies in a room, closed the door and personally apologized to everyone for not doing more, for not getting the points he needed to get to get a U.S. victory. For people who don’t think Woods really cares, whenever that turn or that pivot occurred in his career, it has fully turned.”

Europe retained the Ryder Cup, 14 ½ to 13 ½, after a rousing comeback in Sunday singles. Woods was sent out in the 12th and final match, and he awkwardly (and inconsequentially) halved against Francesco Molinari after the Europeans had already clinched the cup.

It was a bizarre end to a disappointing week for Woods, who also went 0-3 in team play with partner Steve Stricker.