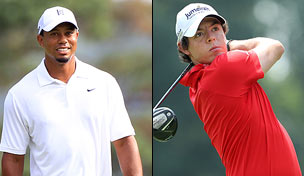 Every sport wants and needs rivalries - and golf is no different. For the upcoming 2012 season, who/what would make for the best, most interesting rivalries? GolfChannel.com senior writers Jason Sobel, Randall Mell and Rex Hoggard weigh in with their thoughts.

Sure, there’s already a rivalry, but if there’s one I’d like to see develop more during the 2012 season, it’s the United States versus Europe.

Hey, it’s a Ryder Cup year and this rivalry has enjoyed all the intrigue of the hammer-and-nail variety over the past decade. Since 2002, Europe has defeated the U.S. in the biennial competition four out of five times and it’s rarely been close.

A greater rivalry can be forged by bulletin board material from each side, but with class acts Jose Maria Olazabal and Davis Love III in the role of captains, don’t expect much trash talk in the weeks and months leading up to the festivities at Medinah.

Instead, the rivalry will have to blossom on the course. The best way for this to happen? Head-to-head battles in each of the major championships and other big events.

Think about it: Let’s take Tiger Woods and Sergio Garcia going one-on-one in the final pairing at Augusta National; Phil Mickelson and Lee Westwood at the U.S. Open; Rickie Fowler and Rory McIlroy at the Open Championship; and Dustin Johnson and Martin Kaymer at the PGA Championship.

Even just a few of those matchups on Sunday afternoons will lead to greater anticipation for the Ryder Cup. In an individual sport, it’s always difficult for rivalries to develop. In a team event, the rivalry is already there. Now let’s see it bloom.

More so than any other sport, golf eschews instant analysis and at no time is that truth more evident than when assessing rivalries.

As a rule, rivalries are developed over decades, not a few decent weeks, and unless Phil Mickelson makes an unexpected run at the “Lefty Slam,” the rivalry most worth watching in 2012 would be the much anticipated clash of Tiger Woods and Rory McIlroy.

The Ulsterman has done his part, winning this past year’s U.S. Open by a full length and providing more than a dollop of bulletin board material. Prior to last year’s Ryder Cup, McIlroy said of a possible match with Woods, “Unless his game rapidly improves in the next month or so, I think anyone in the European team would fancy his chances against him.”

Woods’ game has improved and with it the fortunes of a possible Woods-McIlroy rivalry, but we’ve been here before. There was a time when Sergio Garcia was considered Woods’ greatest potential rival, and yet the Spaniard spent much of last season trying to find himself following a “Dear El Nino” letter and ended 2010 78th in the World Golf Ranking.

For all of McIlroy’s potential, a true rivalry is born from the perfect storm of mutually sustained performance, and since he emerged in 2010 only half the dance card has delivered. The rest is up to Woods, and the hands of history.

You can almost see the letters in that sentence straining to clash.

McIlroy vs. Woods holds the most potential as a rivalry to rivet us in 2012.

If McIlroy builds on the momentum he created this year, if Woods ratchets up a comeback with fuel from his late-season victory, golf could be in for an unforgettable year.

It’s not exactly Jack Nicklaus vs. Arnold Palmer, but like that rivalry, there’s a generational clash in the formula that adds to the intrigue.

A classic rivalry requires more than epic showdowns. It requires a little spice in the interaction, something that makes the clash feel personal. We’ve got a little of that in McIlroy and Woods. We’ve got McIlroy as the face and voice of this new generation, as the player who captured the bravado of the new breed professing Europe’s lack of fear of Woods before the last Ryder Cup. We’ve got the reports in how that annoyed Woods.

While there may be mutual respect between the two, there’s also an edge. You know, in a showdown, they’d want to thrash each other.

McIlroy vs. Woods could give us what we’ve been deprived of in the last decade and a half. It could give us our first honest-to-goodness rivalry since Nick Faldo used to battle Greg Norman on the game’s biggest stages. They could give us the struggle that will win a new legion of fans to the game.