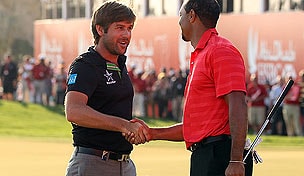 ABU DHABI, United Arab Emirates – More than once on Sunday in his first pairing with Tiger Woods, Robert Rock glared into a gallery filled with fans snapping pictures and creating distractions.

So much so that the Englishman was poised to call someone out on the 10th hole as he settled in over his drive.

“There was a couple of marshals had gone off the side of the tee and they were making quite a bit of noise,” said Rock, who beat Woods by two strokes for his second tour title in Abu Dhabi. “I get ready to hit my iron shot and I heard the same thing and just assumed it was the guy I was looking at.”

Without looking up Rock barked, “Stand still, please,” at the offending noisemaker who turned out to be Woods.

“He just laughed and he was fine,” Rock smiled. “Shouldn’t have done that.”