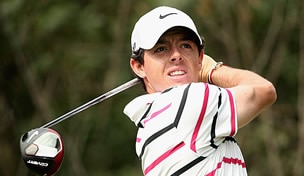 Getty Images
Jonas Blixt of Sweden makes a tee shot on the ninth hole during round one of the Frys.com Open at the CordeValle Golf Club on October 10, 2013 in San Martin, California. (Photo by Robert Laberge/Getty Images)  -

One day after the president of the PGA of America floated the idea of taking the PGA Championship to Royal Portrush, former world No. 1 Rory McIlroy came out in staunch support of playing the season's final major in his native Northern Ireland.

"I've spoken to Ted (Bishop) and to people at the PGA about this - they approached me a few months ago and I'd be all for it," said McIlroy according to a Reuters report. "It's quite a long way down the road, 10 years or so, maybe a bit more, but I'd love to be able to play a major championship at home."

Last month, reports surfaced that the PGA of America was considering taking its marquee event overseas, though the next open date for the event is not until 2020. Thursday, Bishop indicated that his wish list of venues would include Portrush, which hosted its lone major championship in 1951.

"Royal Portrush would be a great first international major," Bishop said during his appearance on "Morning Drive." "I think given the powerful effect that Irish golfers have on the professional game, that might be a good place to start."

The Northern Ireland club has been mentioned in recent years as a possible venue for the Open Championship in 2018 or 2019, though the R & A denied reports that any decision on host site for those dates had been determined. Portrush did host the 2012 Irish Open to much fanfare, an event that McIlroy points to as evidence that the club is ready for the major stage.

"Having the Irish Open there at Portrush made a huge impact," said McIlroy. "I think everyone saw how well it was supported, so if they had 5-10 years to prepare, it could be massive."

"I couldn't believe it and read it three times," McDowell told the Irish Independent. "I had heard the PGA was looking at going global, which is a very positive step forward, but I was expecting Asia, not the north coast of Ireland."

A winner of the 2010 U.S. Open at Pebble Beach, McDowell feels it's time to shift the landscape of golf's four major championships in a more global direction.

"Having three majors in America, with the way the game is growing, is a little too weighted," he added. "It's the fourth major of four, so taking it somewhere else would really boost the interest. Asia, Australia or Europe would really embrace it."