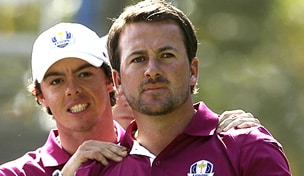 Getty Images
DULUTH, GA - MAY 15: Chez Reavie hits from the sand on the eighth hole during the first round of the AT&T Classic at TPC Sugarloaf on May 15, 2008 in Duluth, Georgia. (Photo by Matt Sullivan/Getty Images)  -

Apparently, that was the case last weekend for Rory McIlroy.

According to a report in The Herald, “eyebrows were raised” when the former world No. 1 was noticeably absent from good friend Graeme McDowell’s intimate wedding in the Bahamas.

So, what was the reason for the 24-year-old’s no-show?

“Rory was in the U.K. to do a photo shoot for one of his sponsors, Nike,” a spokesman for McIlroy told the newspaper. “Wayne Rooney is another Nike athlete and they did the shoot together.”

McIlroy has been largely silent on Twitter, tapping out only two messages in the past two weeks, but his girlfriend, Caroline Wozniacki, chimed in with this last Saturday:

All the best @Graeme_McDowell and @kristinstape! Have a fantastic day.. Many happy years together as Mr and Mrs McDowell ????