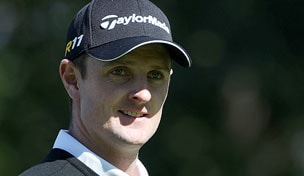 Justin Rose has pulled out of the season-ending Dubai World Championship and will remain in the U.S. to be with his wife, Kate, in advance of the birth of the couple's second child.

'Flying home to Orlando for an amazing off season,' said Rose on his Twitter account. 'Our 2nd baby is on its way very soon. Sorry I couldn't play in Dubai. Family first.'

After missing the cut in the Hong Kong Open last week, Rose was No. 48 on the European Tour money list. It was his 13th European Tour start of the year – a critical number in maintaining his membership which increases chances of making next year's Ryder Cup team.

Unlike the FedEx Cup, the Race to Dubai – and the distribution of its $7.5 million bonus pool – hinges on money earned during the season. Even with a win in the season finale, Rose could not have caught leader Luke Donald.