Stricker near lead after Sony's third round 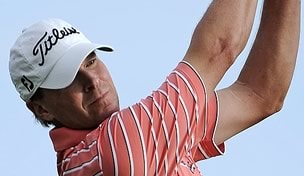 Jeff Maggert shares control of the Sony Open in Hawaii with 36-hole leader Matt Every. With a third round of 6-under 64, Maggert is even with Every on 12 under par.

It will be a wide-open final round, however, as 27 players are within five shots of the lead, most notably Steve Stricker, who is seeking a Hawaiian double after winning last week's Hyundai Tournament of Champions. Stricker is four back at 8 under after a 67.

In third place on 10 under are Johnson Wagner, Brendon de Jonge and Charles Howell III. Wagner and Howell shot 66 on Saturday at Waialae CC. After a 62 on Friday, de Jonge was five shots higher on Saturday.

Duffy Waldorf and D.A. Points share sixth on 9 under.

Maggert, who will turn 48 next month, is searching for his first PGA Tour win since the 2006 FedEx St. Jude Classic.