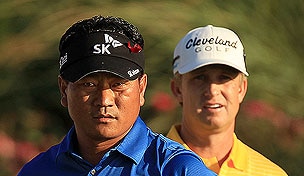 What a roll David Toms is on right now. He’s riding the wave of momentum from his spotlight week at The Players despite losing in the sudden-death playoff on Sunday.

It made me curious who the last player was to lose in a playoff and win their next start, or if it had ever happened.

After searching through the PGA Tour media guide and logging onto the PGA Tour’s statistical inquiry site, I still couldn’t come up with the answer. So I contacted Alex Turnbull, network graphics coordinator at the PGA Tour. He told me the Tour does not have that stat anywhere that he knows of … so I hit a dead end.

But what we can examine is how David Toms has performed in the past after a runner-up finish.

Looking back at his career, we have four runner-up finishes to examine since 2009. After a T-2 at the 2009 Sony Open in Hawaii, Toms tied for 25th in his next start, the Bob Hope Classic. But that’s the best he’s rebounded. In his other three previous starts following runner-up finishes – which came at the 2009 FedEx St. Jude Classic, the 2009 Travelers Championship and the 2010 Wyndam Championship – Toms missed the cut.

So there is no precedent for his performance so far this week. Toms hasn’t won since the Sony Open in Hawaii in 2006, but a win at this week’s Crowne Plaza Invitational at Colonial would certainly be redemption for his loss at TPC Sawgrass.

The most recent runner-up redemption story on the PGA Tour is that of Robert Garrigus who lost in a playoff in Memphis last year at the FedEx St. Jude Classic then went on to win a few months later at the final event of the season, the Children’s Miracle Network Classic.

Perhaps Toms is due a similar reward, but this one much sooner, and, as far as anyone knows, unprecedented.