Sammy the squirrel headed back into the wild 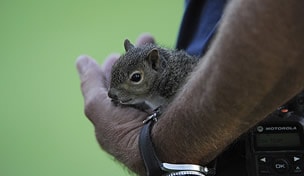 DUBLIN, Ohio – So what happened to Sammy the squirrel when all the fanfare subsided Thursday night?

In the most unusual story that developed Thursday at the Presidents Cup, Love adopted a new team mascot when he rescued a baby squirrel on the course. Steve Stricker’s wife, Nicki, named the squirrel Sammy because nobody was sure if the squirrel was a boy or a girl and the name fit either.

Love brought Sammy back to the course for Friday’s foursomes, but he won’t be taking him around to the matches on his lap in his cart again. Love told Golf Channel’s Todd Lewis that he sought some expert help in what he ought to do with the squirrel. He was told he should release him back into the wild. So that’s just what Love did before Friday’s matches began. He released Sammy back at the tree where he found him (image below).

Love said Sammy was good luck. All three matches Love followed with Sammy in tow on Thursday were won by the Americans.