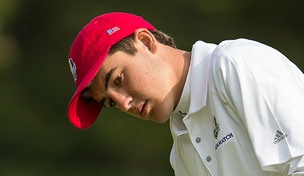 Getty Images
TURIN, ITALY - MAY 07: Marcus Higley of England plays his bunker shot on the 17th hole during the first round of the BMW Italian Open at Royal Park I Roveri on May 7, 2009 near Turin, Italy. (Photo by Stuart Franklin/Getty Images)  -

With a U.S. Junior Amateur title and semifinal appearance at the U.S. Amateur under his belt, Scott Scheffler added to his 2013 accolades Tuesday when he was named to the 2013 Rolex Junior Boys' All-American team as part of an announcement by the AJGA.

The 17-year-old currently tops the Polo Golf Rankings, which are used to determine the 12 members of the All-American squad, and is committed to play golf for the University of Texas. Others making the first-team list include 16-year-old Brad Dalke, who has verbally committed to Oklahoma, Adam Wood, who made the list for the second straight year and will play golf for Duke next year, and 15-year-old Andy Zhang, who last year was the youngest player to qualify for the U.S. Open.

On the Girls' side, the team is once again led by Alison Lee, who currently holds the top spot in the Polo Golf Rankings and earns first-team honors for the sixth time. Currently a freshman at UCLA, the 18-year-old Lee is joined this year by Gabriella Then, a freshman at USC who won the U.S. Girls' Junior title this summer, and Karen Chung, who like Then now plays for USC and like Lee made the first team for the sixth time in her career.