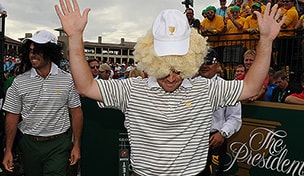 DUBLIN, Ohio – After a “hairy” start, Louis Oosthuizen and Charl Schwartzel “combed” the kinks out of their games.

Oosthuizen and Schwartzel showed up at the first tee Thursday at the Presidents Cup in a pair of wild wigs. Oosthuizen was in a blond wig and Schwartzel a black one when they shook hands with Phil Mickelson and Keegan Bradley.

After taking the wigs off to begin play, the joke looked like it was going to be on them. Oosthuizen and Schwartzel lost the first hole and never led through 11 holes before rallying to win, 2 and 1.

“My wife phoned me before the match this morning and said she was at a shop and there were two wigs there,' Oosthuizen said. 'She wanted to know if we wanted to have a go with them. I said, `Yeah, bring them.’”

The gag was rooted in the bad haircuts Oosthuizen and Schwartzel both received early in the week. The team barber completely botched their cuts, taking off a lot more hair than either player wanted.

“I thought it was a good thing to show everyone we would actually like to be wearing wigs,” Oosthuizen cracked.

A nearly 90-minute rain delay helped Oosthuizen and Schwartzel. They were down in the matches when the rain hit but came back and took command on the back nine.