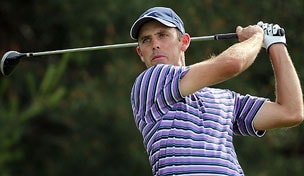 Charl Schwartzel is aiming for a home-country hat trick this week as he kicks off his 2012 season at the Joburg Open in South Africa.

The Masters winner is the two-time defending champion of the event at Royal Johannesburg CC, winning by six shots last year and by four in 2010. No wonder: Schwartzel practically enjoys a home-course advantage.

“It is a golf course I've played many times as an amateur and junior and I grew up not too far away from Royal Johannesburg so it is always nice to play the course,” he said, according to the European Tour.

If he can defend his title for a second time, Schwartzel will join a quintet of impressive names as the only players ever to win a European Tour event for three consecutive years. Nick Faldo, Colin Montgomerie, Ernie Els, Tiger Woods and Ian Woosnam have also accomplished the feat.

“I’m up for the challenge,” Schwartzel said. “If I can win this week it would be the first time that I’ve won a tournament three times in a row. So I’ve got something to play for.”

Challenging Schwartzel, however, will be a battery of fellow countrymen. Close friend Louis Oosthuizen is in the field, as well as former champion and resurgent player Richard Sterne and Retief Goosen, who has finished in the top six in his last pair of South African starts.