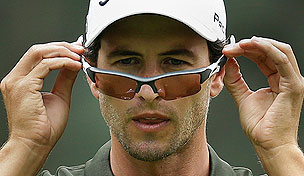 ATLANTA – What a difference 24 hours makes.

Adam Scott showed up at East Lake just before lunch on Sunday feeling and looking much better than he did on Saturday.

The Australian began Round 3 suffering from flu-like symptoms and needed an IV before teeing off. He struggled to an opening-nine of 40 on Saturday and slipped into a tie for 10th place, nine shots out of the lead.

“Pretty disappointed because I felt like I could have made a run today with some good golf. It went completely the other way,” said Scott after his Saturday 74. “When your body's feeling so lethargic and heavy, the club feels like it weighs 60 pounds, and it was just hard work to get anything moving.”

Scott told GolfChannel.com on Sunday at East Lake he was feeling better prior to his 12:45 p.m. (ET) tee time.