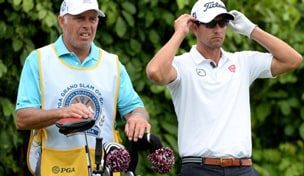 Getty Images
The Aussie putter cover of Marc Leishman of the International Team is seen during a practice round prior to the start of The Presidents Cup at the Muirfield Village Golf Club on October 2, 2013 in Dublin, Ohio. (Photo by David Cannon/Getty Images)  -

Scott carded a 7-under 64 Wednesday at Port Royal Golf Course to finish the 36-hole exhibition at 8-under 134. His round was highlighted by a 6-iron approach to the par-5 17th hole that rolled to within inches of the cup, giving the Aussie a tap-in eagle to finally overtake Rose atop the leaderboard.

Scott takes home $600,000 for winning the event, which annually gathers the season's four major champions and has been played on the island of Bermuda since 2007. Rose, who closed with a 2-under 69 after holding a two-shot advantage through 18 holes, will receive $300,000 as runner-up.

Rose appeared in control heading down the stretch, having increased his lead to three shots through 12 holes on the heels of four straight birdies on Nos. 4-7. Scott birdied holes 13 and 15, however, and drew even with the Englishman after Rose's bogey on No. 16. Scott's subsequent eagle on the penultimate hole proved to be the difference.

Entering the day in second place, PGA champion Jason Dufner fell to third after a 1-under 70, finishing the event five shots behind Scott. Defending Grand Slam champion Padraig Harrington, playing in lieu of British Open winner Phil Mickelson, carded the group's highest score for the second consecutive day, an even-par 71 that left the Irishman in fourth place, 11 shots off the pace. For their efforts, Dufner and Harrington will take home $250,000 and $200,000 in prize money, respectively.